On Friday, a young fan at the Red Sox Town Hall event at Foxwoods Resort Casino asked Farrell who Boston is going to beat this season. The skipper replied by saying he thinks the Red Sox are going to defeat the Washington Nationals in the 2015 World Series.

Farrell?s response, as you might imagine, was met with a rousing ovation from the energetic crowd at the Baseball Winter Weekend. The possibility also isn’t too far-fetched given that the Red Sox have retooled over the last few months and the Nationals — already one of the best teams in baseball — just added ace Max Scherzer.

The Red Sox are coming off a disappointing season in which they finished with a 71-91 record. The Nationals went 96-66 and won the National League East in 2014 but lost to the eventual World Series champion San Francisco Giants in the NLDS.

Did ‘Sesame Street’ Troll Patriots With ‘Inflate’ Word Of The Day? (Video) 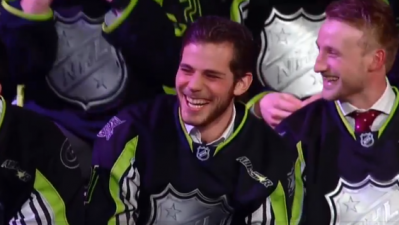