FOXBORO, Mass. — Anyone who even casually follows the New England Patriots knows, wide receiver Julian Edelman used to line up at quarterback during his college days at Kent State.

The Patriots never chose to utilize Edelman’s arm, however.

With the Patriots trailing the Baltimore Ravens by a score in the third quarter of their divisional-round matchup, offensive coordinator Josh McDaniels decided to reach deep into his bag of tricks.

Quarterback Tom Brady received the snap and threw a backward pass to Edelman, who proceeded to uncork a bomb downfield to a streaking Danny Amendola. Amendola caught the pass in stride and waltzed into the end zone, tying the score and whipping the Gillette Stadium crowd into a frenzy.

It was the first pass of Edelman’s six-year NFL career and the second touchdown of the game for Amendola, who also caught a 15-yard score from Brady in the first half. 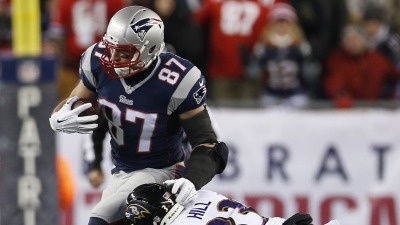