That’ll do for this year’s edition of NFL Honors. Thanks for joining us, everyone.

9:42 p.m.: The 2014 Walter Payton Man of the Year Award, which takes into account a player’s performance both on the field and in his charitable and community endeavors, goes to Panthers linebacker Thomas Davis.

9:34 p.m.: In another no-brainer, Patriots tight end Rob Gronkowski takes home the award for Comeback Player of the Year.

After losing the second half of the 2013 campaign to knee injury, Gronkowski came back stronger than ever this season. He ranked 15th in the NFL in receiving yards (1,124) and tied for fourth in receiving touchdowns (12), and quickly reasserted himself as Tom Brady’s No. 1 weapon.

9:25 p.m.: Steelers running back Le’Veon Bell is the recipient of the 2014 Fantasy Player of the Year Award. Bell rushed for 1,361 yards on 290 carries for Pittsburgh this season, good for second in the NFL behind only Offensive Player of the Year DeMarco Murray.

9:06 p.m.: Can anyone argue that J.J. Watt is not the best defensive player in the NFL? According to the voters, that’s a no.

Watt was a unanimous pick for 2014 Defensive Player of the Year.

9:01 p.m.: Todd Bowles picks up one last award before leaving Arizona for the New York Jets. He’s been selected as the 2014 Assistant Coach of the Year.

8:57 p.m.: The title of Defensive Rookie of the Year goes to Rams sack master Aaron Donald.

Donald led all rookies in sacks with nine this season, set an NFL record for tackles for loss by a rookie lineman with 17, recorded 47 tackles and forced two fumbles.

Arians’ selection is well deserved, as the former Colts assistant guided the Cardinals to an 11-5 record despite injuries to both his first- and second-string quarterbacks. The fact that Arizona started Ryan Lindley under center in a playoff game says it all.

It’s the second time in three years Arians has won the award, as he also did so after serving as the interim coach in Indianapolis during Chuck Pagano’s period of cancer treatment.

8:28 p.m.: The winner of this year’s Salute to Service Award is Bears defensive end Jared Allen.

8:25 p.m.: Keeping with the theme of offensive players, Cowboys running back and NFL rushing leader DeMarco Murray earns the award for Offensive Player of the Year.

Murray finished the regular season with 1,845 rushing yards to lead the league by a massive margin (second-place Le’Veon Bell finished with nearly 500 fewer). The Dallas back also finished tied with Seattle’s Marshawn Lynch for the NFL lead in touchdown carries with 13.

In addition to making what some declared the greatest catch of all time, Beckham finished his first NFL season with 91 catches for 1,305 yards and 12 touchdowns — all while playing in just 12 games.

8:14 p.m.: It looks like this year’s Hall of Fame class will include Jerome Bettis, however.

8:01 p.m.: The 2015 Pro Football Hall of Fame class has yet to be announced, but former Colts wideout Marvin Harrison reportedly will not be among the NFL greats selected.

7:30 p.m.: Not to be upstaged by Tony Romo, here’s Aaron Rodgers, accompanied by actress Olivia Munn.

7:05 p.m.: You didn’t really think Von Miller would show up in a regular suit, did you?

6:10 p.m.: Carolina Panthers linebacker Luke Kuechly is back on the red carpet. The Boston College product certainly had a memorable night at this event two years ago, as he took home the award for Defensive Rookie of the Year.

5:15 p.m.: In case you forgot, Rex Ryan no longer will be manning the New York Jets’ sideline come next season. Replacing him will be this guy, former Cardinals defensive coordinator Todd Bowles.

4:40 p.m.: The red carpet festivities are about to begin.

But before the New England Patriots and Seattle Seahawks square off Sunday in Super Bowl XLIX, there’s one final order of business to take care of.

That would be the fourth annual NFL Honors awards ceremony, which, as the name implies, will honor the league’s top coaches and players on both sides of the ball.

Also included will be the announcement of the 2015 Pro Football Hall of Fame class, with a loaded group of players and coaches — including Jerome Bettis, Junior Seau, Marvin Harrison and Tony Dungy, among others — all vying for induction.

The show will air on NBC at 9 p.m. ET Saturday, but it actually begins one hour earlier. So, if you want to know the winners as they’re announced rather than waiting for the tape delay, keep it locked in right here, as we’ll be bringing you all the action as it happens.

Also stay tuned throughout the afternoon for all the sights and sounds from the red carpet. You know, things like this:

L.A. Kings Poised For Another Strong Second Half Of NHL Regular Season 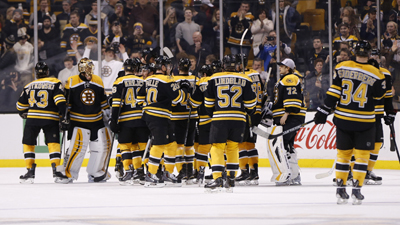