Patriots-Ravens Preview: Rob Gronkowski Should Be The Difference-Maker - NESN.com Skip to content

The Baltimore Ravens will face the Patriots for the fourth time in six postseasons. The Ravens beat the Patriots in the 2009 and 2012 seasons, and New England squeaked past Baltimore in 2011. None of those matchups matter now, however.

The Patriots open as 7.5-point favorites over the Ravens, and one player should be the difference-maker: tight end Rob Gronkowski, who didn’t play in the 2012 AFC Championship Game, nor New England’s 41-7 regular-season win over Baltimore last December. The Patriots’ offense is a different entity with Gronkowski in it, and after sitting out of New England’s Week 17 loss to the Buffalo Bills for precautionary measures, he should be ready and roaring to go — or “mad eager” in his own words — for the divisional playoff round.

Check out the Patriots-Ravens playoff matchups:

WHEN THE PATRIOTS PASS
Patriots: 257.6 yards per game (ninth in the NFL)
Ravens: 248.7 yards allowed per game (10th)
Advantage: PATRIOTS

The Ravens have a dangerous pass rush going up against an up-and-down Patriots offensive line, but Baltimore’s secondary has been inconsistent since starting cornerback Jimmy Smith suffered a season-ending foot injury in Week 8.

The Patriots’ offensive line struggled to start the season, rebounded when New England’s coaches found the correct alignment (Nate Solder, Dan Connolly, Bryan Stork, Ryan Wendell and Sebastian Vollmer from left to right), then fell off again when Connolly started regressing because of injuries in Week 12.

Connolly will have four weeks of rest before the Patriots’ first playoff game, so he should be relatively healthy and ready to shore up his squad to help protect quarterback Tom Brady from Ravens edge rushers Terrell Suggs and Elvis Dumervil.

The Ravens, like most NFL teams, don’t have an obvious matchup for Gronkowski, and if the big tight end is double covered, then that could free up wide receiver Julian Edelman. We’ll keep a close eye on fellow wideout Brandon LaFell, who missed practice during the Patriots’ playoff bye because of a lower leg injury.

The Ravens are fresh off allowing just 68 yards (and 3.6 per carry) to a depleted Steelers rushing attack. Haloti Ngata and Brandon Williams make an imposing pair, clogging up the middle of the field.

The Patriots lost starting running back Stevan Ridley in Week 6, and Jonas Gray, LeGarrette Blount and Brandon Bolden have filled in admirably yet inconsistently since.

The Patriots are rushing for just 3.9 yards per carry this season, while the Ravens are allowing just 3.6. If Blount can get going early, it could be a long day for the Ravens. The Patriots running back usually has to get on a roll to thrive.

Those numbers above don’t tell the whole story, since the Patriots usually play from ahead, forcing opposing teams to abandon the run and start throwing the ball.

The Patriots have allowed just an 84 passer rating this season, while Ravens quarterback Joe Flacco had a 91 passer rating during the regular season. It’s unclear how the Patriots will choose to match up against the Ravens, but cornerback Darrelle Revis should be able to shut down one of the Ravens’ starting receivers, either Steve Smith or Torrey Smith.

Brandon Browner will be situated on the other side, using his elite physicality and length to disrupt routes and passes, while a well-rested Kyle Arrington should man the slot.

Patriots free safety Devin McCourty is one of the best in the league, and strong safety Patrick Chung has done a solid job against starting tight ends this season.

The Patriots’ pass rush has been inconsistent this season, but they’ll benefit if Ravens starting left tackle Eugene Monroe is out for the third consecutive week. The Patriots can bring pressure from all over, thanks to edge rushers Chandler Jones, Rob Ninkovich and Akeem Ayers and linebackers Dont’a Hightower and Jamie Collins.

Those stats above, again, are slightly deceiving. The Patriots have fortified their run defense in the second half of the season, allowing just 79 yards per game over the last eight contests. They have three massive 325-pound defensive tackles in Vince Wilfork, Sealver Siliga and Alan Branch, and they also have Hightower, one of the best run-stuffing linebackers in the NFL.

Ravens running back Justin Forsett, who rushed for 1,266 yards and eight touchdowns this season, has been one of the NFL’s best stories, but he ran for just 36 yards on 13 carries against the Steelers.

This matchup also could be decided by Monroe’s health. If he’s good to go, the Ravens could have success on the ground. If not, they’ll have to depend on Flacco and the Smiths to move the ball. 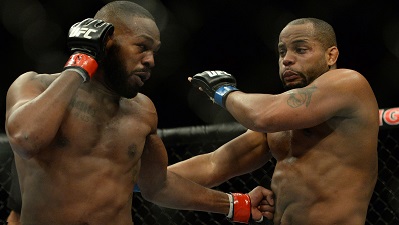 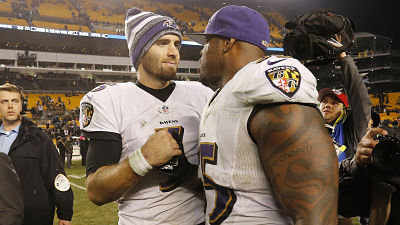