The Los Angeles Galaxy appear to have won the race for Steven Gerrard’s signature just days after it started.

Gerrard will join the Galaxy from Liverpool after he agreed to terms of an 18-month contract with the reigning MLS champions worth £3.9 million ($6 million) per year, ESPN and the Los Angeles Times reported Saturday night. Gerrard will be eligible to don the Galaxy’s uniform in July when the summer transfer window opens for MLS teams.

Gerrard, 34, announced Friday he’ll leave Liverpool when his contract expires at the end of the 2014-15 season. Gerrard has spent his entire career with Liverpool and has captained his boyhood club for the last 11-plus years. Gerrard decided against signing a new contract with Liverpool but refuses to compete against the Reds in his next adventure.

Gerrard told Liverpool TV on Saturday that he’ll play in North America with an MLS club, but he didn’t specify which one. The Galaxy, New York Red Bulls, New York City FC and Toronto FC were believed to be the leading contenders for Gerrard’s services, and the Anfield legend will make a new home for him and his family on the West Coast.

MLS declined to comment on the Gerrard to Los Angeles report Saturday, according to ESPN.

Gerrard is ending his LFC career at the right time >> 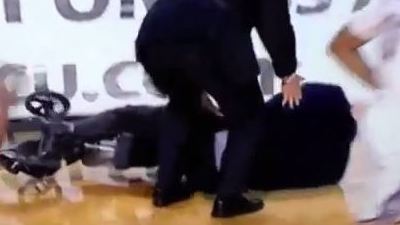