If being banned from professional cycling and stripped of his seven Tour de France titles was a fall from grace for Lance Armstrong, then what he got himself into in December was a plummet.

Police in Aspen, Colo., cited Armstrong this week with failing to report an accident and speeding after he hit parked cars and allowed longtime girlfriend Anna Hansen to take the blame for the Dec. 28 incident, ESPN reported. Hansen told police she lost control of the car due to ice and that she was driving because Armstrong “had a little bit to drink” at an Aspen Art Museum party.

But a man whose car was hit said Hansen told a different story after she came to his door to apologize.

“She said, ‘I’m Anna, we’re the Armstrongs, my husband’s Lance, he was just driving maybe too fast around the corner or something,'” Thomas Van Allen told police, per ESPN.

Hansen later admitted to police that she took the blame for Armstrong.

“We’ve had our family name smeared over every paper in the world in the last couple of years and honestly, I’ve got teenagers, I just wanted to protect my family,” Hansen said. “I thought, ‘Gosh, Anna Hansen hit some cars, it’s not going to show up in the papers,’ but Lance Armstrong hit some cars, it’s going to be a national story.”

Armstrong is scheduled to appear in court for the incident on March 17. Hansen will not be charged with a crime. 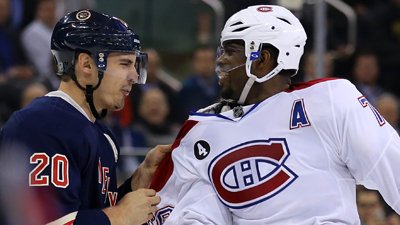 P.K. Subban Fined $2,000 For Diving During Canadiens’ Game Vs. Rangers