GLENDALE, Ariz. — Malcolm Butler might have been the only person who expected Russell Wilson to pass on second-and-goal at the New England Patriots’ 1-yard line Sunday night.

The Seattle Seahawks came out in shotgun formation with three receivers after Marshawn Lynch couldn’t pound the ball into the end zone on first down. One simple look from Wilson let Butler know exactly what the Seahawks were going to do, with the clock winding down in Super Bowl XLIX.

“Eyes tell everything,” Butler said after the Patriots’ 28-24 win. “I saw Wilson looking over there. He tried to keep his eyes still, just look over there. That gave me a clue, and stacked receivers, I just knew they were gonna throw. My instincts, and I just went with it, it just went through my mind, and I made the play.”

Butler intercepted Wilson’s pass to receiver Ricardo Lockette, which was a pick play, designed to get the No. 3 wideout open. It was a horrendous play call.

The Patriots then just had to kneel on the ball to finish off their fourth Super Bowl championship.

“Two receivers stacked, they’re trying to get somebody open,” Butler said. “It will usually be a pick route. I just made the play. I just had a feeling what was going to happen and made the play.

“Might as well go ahead and just do what you gotta do best. I knew what was going to happen. I just knew. I just beat him to the punch and got the ball.”

“I just figured that they were going to try to pound it with Marshawn Lynch for the touchdown, and they did not,” Revis said.

No offense to the Patriots’ rookie cornerback, but he’s the definition of an unlikely hero. Undrafted out of Division II West Alabama, Butler received a tryout with the Patriots for rookie minicamp. He wasn’t signed until after he practiced with the team.

Butler started with the Patriots at the very bottom of the depth chart, and after fellow cornerback Brandon Browner came off a four-game suspension, the rookie was expected to be released. He beat out Alfonzo Dennard for playing time during the season, worked his way up the depth chart and then was inserted into Sunday’s game in the third quarter after Kyle Arrington and Logan Ryan had given up touchdowns.

Wilson targeted receiver Jermaine Kearse deep with over a minute left in the fourth quarter. Butler leapt up and deflected the pass, but it bounced right back down to Kearse, who by then had fallen on his back. Butler made the play of his life, and it still went for a reception.

“I went to the sideline, I wasn’t feeling too well,” Butler said. “My teammates tried to cheer me up. They said I made a great play. It just landed in his hands. …

“I just went up and deflected it. Nine times out of 10, they usually go away from him, but as I was looking, I saw him falling and he caught it. Whew. It was devastating.”

It’s only right that Butler was able to make the game-winning play after allowing just a fluke.

“I didn’t want to be the reason — that the game was my fault,” he said. “I just went out there and played football. Played the best I can to help the team win. We worked so hard. I just did everything I could.

Butler got emotional when asked if the game, the Super Bowl win and the play had sunk in yet. It finally did at that very moment. 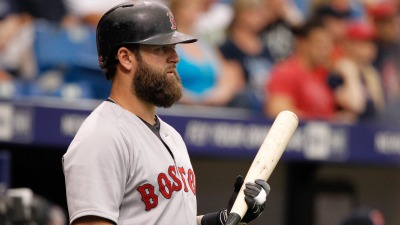