The New England Patriots wasted no time making the celebratory rounds after winning the Super Bowl.

Just hours after defeating the Seattle Seahawks in one of the best Super Bowl games of all time, a few Patriots swung by a live edition of “The Tonight Show With Jimmy Fallon.”

Brandon LaFell, Danny Amendola and LeGarrette Blount made the quick appearance, and as you might imagine, were pretty happy about winning the Super Bowl. The appearance also gave them a chance to rub it in just a little bit to Will Ferrell. The funnyman attended the Super Bowl and was pulling for Seattle, even wearing a Seahawks hooded sweatshirt.

So when the Patriots took the stage with Ferrell already there, Amendola just had to Belichick-ize Ferrell’s hoodie.

See it all below. 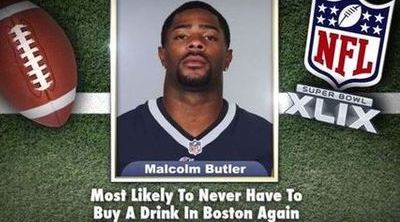