Many Red Sox players — not just pitchers and catchers — have arrived in Fort Myers over the last couple of weeks, but Friday marked the official beginning of camp. The Red Sox have plenty of fresh faces this season after going 71-91 in 2014, so it should be an interesting leadup to Opening Day.

The Red Sox’s 2015 roster looks mostly set, but there are some plots worth watching as the organization looks to put last year in the rearview mirror. Plus, you never know when a twist could emerge.

Let’s hit the ground running with a quick 2015 spring training primer. The first official workout for pitchers and catchers is Saturday.

Most intriguing storyline: Red Sox’s crowded outfield
Having more viable players than available spots is never an issue, so to reference the Red Sox’s outfield logjam as if it’s some sort of dilemma that must be “solved” would be a misrepresentation. Boston is in an enviable position, especially on the heels of a 2014 season in which the club’s depth was tested.

That said, the Red Sox need to figure out how everyone fits into the 2015 puzzle, or if everyone does fit into the puzzle. The Red Sox absolutely could leverage their outfield depth in trade negotiations, if they so choose.

Hanley Ramirez, Rusney Castillo, Mookie Betts, Shane Victorino, Daniel Nava and Allen Craig are the most serious contenders for major league roles. Ramirez is the starting left fielder, but the rest of the outfield is filled with questions.

Player to watch: Xander Bogaerts
Victorino has a lot to prove this spring. He’s coming off an injury plagued season and is competing with Castillo and Betts for a starting role. But since we already touched on the Red Sox’s crowded outfield, let’s bring it back into the infield, where a 22-year-old shortstop is looking to make good on the high expectations that surrounded him upon his big league arrival.

Bogaerts struggled for most of 2014, though he started and finished strong. We could find out this season whether his failure to launch was the product of simple growing pains/the fallout of bouncing back and forth between shortstop and third base amid the Stephen Drew experiment 2.0, or whether the Red Sox should be legitimately concerned about their former top prospect.

Spring production rarely dictates how a player will perform during the regular season, but Bogaerts definitely could benefit from a strong camp. He worked out in Arizona over the offseason, and seeing tangible results early could be a confidence booster.

Prospect to watch: Blake Swihart
There actually are several prospects to watch, with most being pitchers. Henry Owens, Brian Johnson and Matt Barnes are among those trying to prove they should be next in line if Boston’s starting rotation goes off the tracks. But only one Red Sox farmhand is universally considered the top prospect in Major League Baseball at his position.

Catcher Blake Swihart, who is Boston’s top prospect overall, has drawn comparisons to San Francisco Giants backstop Buster Posey. One camp isn’t going to determine his future or affect his prospect status too much, but this spring will give the Red Sox a chance to see just how close the soon-to-be 23-year-old is to being major league-ready and whether he really should be untouchable in trade talks.

Swihart will get to work with Boston’s major league pitchers this spring. The experience will be invaluable.

Non-roster invitee worth monitoring: Mitchell Boggs
The Red Sox invited 17 non-roster invitees to camp. The most noteworthy are Owens, Johnson and Deven Marrero, all of whom are highly regarded prospects auditioning for future roles.

In terms of veterans, right-handed reliever Mitchell Boggs is worth monitoring. It isn’t because he’ll push for an Opening Day roster spot — he won’t — but because he has had major league success in the past. He could make an impression this spring before likely reporting to Triple-A Pawtucket.

Dark horse to make roster: Dana Eveland/Tommy Layne
The Red Sox re-signed left-handed reliever Craig Breslow over the offseason after initially declining his club option. Breslow had a poor 2014, though, so fellow southpaws Tommy Layne and Dana Eveland are positioned well, even if neither break camp with Boston.

Five questions:
Is Henry Owens and/or Brian Johnson ready to make the leap?
Owens and Johnson are on the doorstep. They’re knocking louder and louder. Each is vying for the same opportunity — a big league call-up in 2015 — so expect an intense, yet friendly, competition.

How will Hanley Ramirez adapt to the outfield?
Ramirez is extremely athletic, and it’s not like there’s a lot of ground to cover in left field at Fenway Park. The 31-year-old is navigating uncharted waters, though. His unfamiliarity with the Green Monster (and all that comes with it) should be noted.

Is Mookie Betts the real deal?
Betts looked like a future star last season. But he isn’t the first player to burst onto the scene. The real determining factor will be his ability to adjust as pitchers alter their approach toward him. The 22-year-old also is looking to prove he deserves to be entrenched in the outfield and atop the Red Sox’s order.

Do the Red Sox need an ace?
Clay Buchholz, Rick Porcello, Wade Miley, Joe Kelly, Justin Masterson. It’s a good group of veterans, but the Red Sox don’t have a clear-cut No. 1 starter.

This spring will offer the first taste of whether that’ll be an issue in 2015. 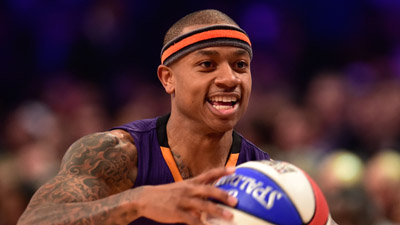 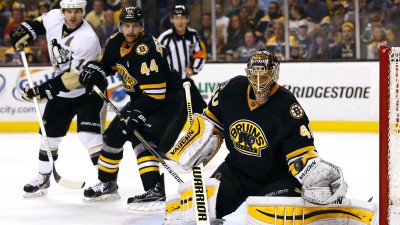