PHOENIX — Julian Edelman passed a concussion test after a big hit in the Super Bowl appeared to leave him groggy, allowing him to continue and catch the winning touchdown a few minutes later, a person with knowledge of the situation told The Associated Press on Monday.

The Patriots top wide receiver was leveled by Seahawks safety Kam Chancellor after a 21-yard completion with just under 11 minutes left in New England’s 28-24 win over Seattle on Sunday night.

After that series, Edelman was checked on the New England sideline by medical staff and an independent neurologist and cleared to return, said the person who spoke on condition of anonymity because he was not authorized to discuss the matter.

“I’m a coach and I had a deal with our trainers and doctors,” he told reporters during a press conference the morning after winning the NFL title. “They’re the medical experts and they don’t call plays, and I’m the coach and I don’t get involved in the medical part. When they clear players to play, then if we want to play them, we play them. The plays we call, I don’t have to get approval from them. It’s a good setup.”

Tom Brady, who won his third Super Bowl MVP award, said Edelman ran a great route on the play but Chancellor was able to get a “good shot on him.”

“Yeah, he took a big hit on what I thought, obviously, (was) one of the big plays of the game,” Brady said. “He got up and kept running. Obviously, they ruled him down, but it was a huge hit.”

Edelman missed the last two regular-season games with a concussion and led the team with 92 receptions. He played in all three postseason games and led the Patriots with 109 yards on nine catches in the Super Bowl.

After the game, Edelman said, “We’re not allowed to talk about injuries.”

Edelman stayed in the game after the big hit and four snaps later, caught a 21-yard pass to the 4. Two plays later, Brady threw one of his four touchdowns to Danny Amendola to cut Seattle’s lead to 24-21.

With Edelman on the sideline after that touchdown, the Seahawks went three-and-out. Edelman made a fair catch on the punt and was back on the field for the start of the Patriots winning drive with just under seven minutes remaining.

On the third play of the 10-play series he caught a 9-yard completion. And on the 10th play, from the 3-yard line, he spun around backup cornerback Tharold Simon on the left side and caught a 3-yard scoring pass for the 28-24 lead with 2:02 left.

“Coach called a return route,” Edelman said. “They hit hard so we had to take advantage of our … strengths, (which) are our quickness and we were able to do that.” 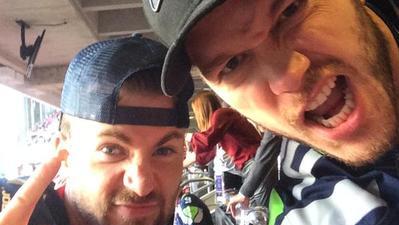 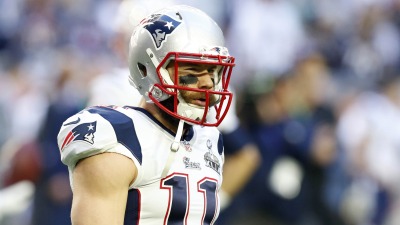