As Boston digs its way out of another winter storm, several Red Sox players already are down in Fort Myers.

Rick Porcello, Jackie Bradley Jr., Blake Swihart and a “smattering of minor leaguers” were spotted working out at JetBlue Park on Tuesday, according to WEEI.com’s Rob Bradford. Pablo Sandoval and Justin Masterson reportedly are in town, too, and they’re expected to resume working out at the Red Sox’s spring training facility on Wednesday.

The first official workout for Red Sox pitchers and catchers isn’t until Feb. 21. The first full-squad workout isn’t until Feb. 25. Several players recently said at the Red Sox’s Baseball Winter Weekend event at Foxwoods Resort Casino that they planned to report to camp well before the official start dates, though, and some guys apparently aren’t wasting any time in making good on their promise.

Porcello, who was acquired from the Detroit Tigers at the Major League Baseball winter meetings in December, reportedly threw about 40 pitches off a mound Tuesday while under the surveillance of Red Sox pitching coach Juan Nieves. The right-hander is coming off a career year with the Tigers and is slated to hit free agency next offseason.

Bradford so graciously posted a video of Porcello’s session, which can be seen below. 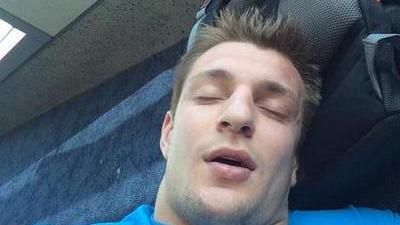