Tom Brady and the New England Patriots had the first chance to open the scoring Sunday night in Super Bowl XLIX. But the Legion of Boom had other plans.

Facing third-and-6 at the Seattle Seahawks’ 10-yard line in the first quarter, Brady dropped back to pass and, with defensive lineman Michael Bennett barreling down on him, threw a duck intended for wide receiver Julian Edelman but intercepted by defensive back Jeremy Lane at the goal line.

Brady got walloped by Bennett after he threw the ball, but he wasn’t the only player who took a beating on the play. Edelman knifed in to tackle Lane, and the Seahawk appeared to come down awkwardly on his left arm.

Lane, if you’ll recall, was the same player who said Rob Gronkowski “wasn’t that good” earlier in the week.

Lane left the game and is doubtful to return. 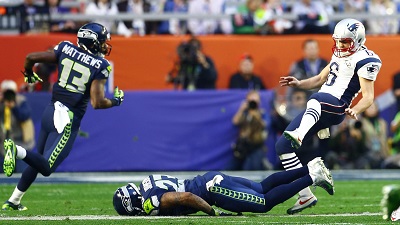 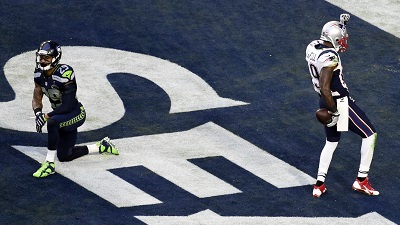