BOSTON — The Buffalo Sabres avoided a sweep of their season series with the Bruins after winning 2-1 in a shootout Tuesday night at TD Garden.

The Bruins dominated puck possession, spent the majority of play in the attacking zone and tallied 95 shot attempts through regulation and overtime. A lack finish, which has haunted the Bruins throughout the season, was among the main reason’s for Boston’s defeat.

Tyler Ennis’ goal in the shootout was the difference for the Sabres.

The Bruins return to game action Thursday night against the Ottawa Senators. It’s the first matchup in a three-game road trip.

Here are three takeaways from Bruins-Sabres:

The Bruins controlled the majority of play in the first period and headed into the intermission with a 14-3 advantage in shots on goal, a 27-9 edge in shot attempts and a 13-3 lead in scoring chances. The Bruins opened the scoring when Loui Eriksson capitalized on a fortunate bounce off the end boards and shot the puck into the open net. It was Eriksson’s sixth goal in the last month and 18th on the season.

The BruinsÂ have opened the scoring in 12 of the last 13 games.

Svedberg was hardly to blame for the loss, though. He made a number of stellar saves to keep the Bruins in the game, including a fantastic stop on a Brian Gionta scoring chance in the low slot during the third period.

“He got tested at times where he made some big saves in overtime, and again, the pad save there late in the third,” Bruins head coach Claude Julien said. “He made the big saves where he had to. I think it was up to us to do the rest in front of him, and we didnâ€™t.”

B’s No. 1 goaltender Tuukka RaskÂ was a scratch due to “general soreness,” per the team. Boston recalled Jeremy Smith from the Providence Bruins on an emergency basis to be Svedberg’s backup. Smith has never appeared in an NHL game.

Julien refused to comment on Rask’s injury after the game.

Sabres backup Anders Lindback made a season-high 44 saves on 45 shots for his first win as a starter this season. He entered Tuesday’s game 0-10-2 as a starter, including an 0-5-2 record in his last eight appearances.

Lindback was under constant pressure throughout the game and had to battle through lots of traffic in front of his net. He remainedÂ composed and well-positioned in net to hold the Bruins to a single goal despite tallying 95 shot attempts.

“I think we as a team deserve it,” Lindback said of his team’s victory. “We have been working so hard and where we are itâ€™s a tough situation to be in for everyone that is here. I got to say that I have been impressed with everybody to just keep battling and keep buying in on a day like this, so it feels good.” 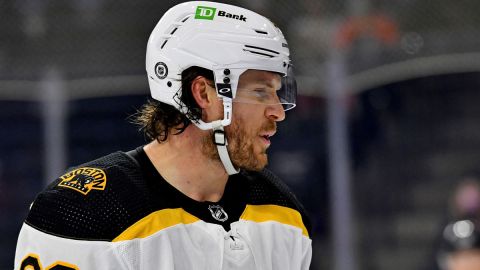 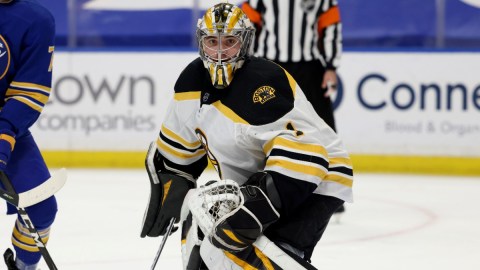