It took Evan Turner 360 games to record his first NBA triple-double. The wait for his second wasn’t nearly as long.

Turner reached triple-double territory for the second time in less than a month Monday, compiling 19 points, 12 assists and 10 rebounds as his Boston Celtics routed the Brooklyn Nets 110-91 at the Barclays Center.

?He knows how to play,” Celtics coach Brad Stevens told reporters after the win, which snapped a three-game losing streak for Boston. “Every night he fills the box score anyway, but maybe not to that level. But he was really good with the ball (Monday night). He was good making decisions off pick-and-rolls. You could tell he was aggressive from the start. … He?s a good player. We need everyone to play well, and he played well (Monday night).”

Turner wasn’t the only Celtic to fill up the box score Monday. Six of the 10 Boston players who saw action against Brooklyn scored in double figures, including much-maligned big man Kelly Olynyk, whose issues shooting the ball of late have been well-documented.

Olynyk double-bounced in a 3-pointer at the first-half buzzer then helped the Celtics pull away down the stretch. Twelve of his 18 points came in the game’s final 14 minutes.

?That shot bouncing in at halftime was huge for him, I think, just emotionally,” Stevens said. “When things aren?t going your way, it?s nice to see the ball go through the net. He shot it well, and he was also attacking and passing well and moving it. He and Jonas (Jerebko) were a nice pair in there, especially on offense.”

Jerebko chipped in with 10 points, two of which came on this emphatic baseline dunk:

— We touched on it after their win over the Indiana Pacers earlier this month, but the Celtics have been just plain nasty in the second games of back-to-backs this season. They’ve now won eight of their last nine.

— Jae Crowder is regarded as one of the Celtics’ better defenders, but he has some explaining to do after this one:

That one highlight wasn’t indicative of Crowder’s performance on the defensive end Monday, but the forward did have a great deal of trouble finding the bottom of the basket. He went 3-for-13 from the floor and 1-for-7 from 3-point range to finish with nine points and five rebounds.

— San Antonio Spurs big man Matt Bonner said Monday that he wants to see the Celtics make the playoffs, and no, it’s not so he’d have a chance to exact his revenge on Marcus Smart. Bonner is a New England native, having grown up in Concord, N.H., and he’d like to see the hometown team have its shot in the postseason.

— Point guard Isaiah Thomas missed his eighth straight game for the Celtics, but all signs seem to point to an imminent return.

?Everything I?ve been told is that Wednesday is as close to probable as it gets,? Stevens said before the game, via Celtics.com.

A Wednesday return for Thomas would add an extra level of intrigue. Boston’s opponent that night will be the Miami Heat, the team Thomas suffered his lower back injury against after a hard foul by Heat star Dwyane Wade. 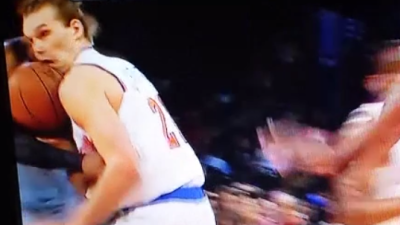 Knicks Player Gets Destroyed By Mike Conley, Is Called For Foul (Video)