This looked more like the Isaiah Thomas we’re used to seeing.

Thomas was far from perfect Friday against the New York Knicks — his second game back after a bruised lower back sidelined him for eight — but he looked far more composed than he did during Wednesday’s loss to the Miami Heat.

The Boston Celtics point guard went just 4-for-13 from the floor (including 2-for-7 from 3-point range), but the aggressiveness and nose for the basket that make him such an offensive force both were present and accounted for. Thomas got to the free-throw line nine times, making eight, to finish with a team-high 18 points, and he paired his six assists with just one turnover as the Celtics held off the Knicks 96-92 at Madison Square Garden.

?I talked to him before the game, and I asked him how?s his soreness,? forward Jae Crowder told reporters in New York. ?He said it?s there, but it?s not as bad as it was last game. So, it?s getting better each and every day, and he got back to almost looking like his normal self. He felt good on his shots. His shots weren?t short, he got good lift off his shots, so you can tell he?s getting back to normal, and I expect him to keep growing.”

“It was nice to see him get going a little bit,” head coach Brad Stevens added.

Some additional notes from Friday’s win, which allowed the Celtics to hold on to eighth place in the Eastern Conference:

— Boston did not hit its stride until the second quarter (New York led 22-21 after one), and the Knicks scored 11 points in the final 34 seconds of the game to trim a nine-point deficit down to three.

A four-point win over the worst team in the NBA isn’t something to be particularly proud of, but Stevens was pleased with the way his team did not cave down the stretch.

— Crowder, who finished with 17 points and nine rebounds, was asked after the game about his highly active Twitter account, and, more specifically, why he LOVES TO TWEET IN ALL CAPS.

?People are like, ?Quit yelling, quit using all caps.? That?s just what I do, so get used to it.”

— As someone who spent the majority of his playing career with the Los Angeles Lakers, Knicks coach Derek Fisher isn’t the biggest Celtics fan. He is an admirer of Stevens, though, as he told reporters before the game.

?I wish them a lot of luck other than (Friday night),? Fisher said via The Boston Globe. ?I know that?s hard to hear coming from a former Laker, to wish the Celtics any luck at all. But I like Brad, so I wish him the luck, and he can spread it around to everybody else.?

The Clips, Raptors and Cavs are locked into playoff spots, the Hornets, Pacers and Bucks are very much in the mix, and the Pistons, while highly unlikely to earn a postseason bid, just beat the Celtics on their home floor last weekend. 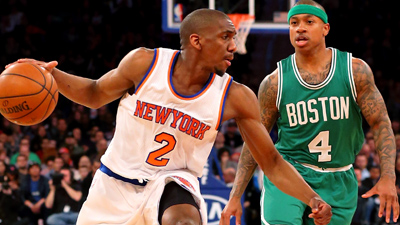