BOSTON — Some of Hassan Whiteside’s Miami Heat teammates were none too pleased with their big man’s actions over the weekend, but Kelly Olynyk isn’t holding any grudges

Olynyk said before the Celtics’ 95-92 win Wednesday over the Memphis Grizzlies that he forgives Whiteside for leveling him with a cheap shot Monday night. Olynyk said Whiteside, who was ejected for his hit in an eventual 100-90 win for Boston, reached out to him via text to apologize.

“I don?t think it was intentional, that he was coming after me,” the Celtics big man said. “I thought he just lost his head for one second, which is unfortunate. He?s a good player, he?s a good human being. He?s just got to keep his head.

“He apologized. And like I said, I think he?s a good guy. Hopefully, he can get it together.”

Olynyk had another strong game off the bench Wednesday, finishing with 15 points, six rebounds and a game-best plus-10 rating. He also was part of the Boston frontcourt unit that held Marc Gasol and Zach Randolph to less than 15 points apiece.

— With Gasol and Randolph largely contained, former Celtic Tony Allen was huge for the Grizzlies in the fourth quarter. Allen scored 10 points, grabbed three rebounds and played all but 52 seconds in the final frame.

Grizzlies coach David Joerger before the game spoke of Allen’s renowned defensive ability, praising the guard’s ability to “shut the water off.”

— Joerger also called veteran wing Tayshaun Prince, who played for the Grizzlies and Celtics this season before returning to the Detroit Pistons last month, “one of my favorite players of all time to coach.”

— Jeff Green’s return to Boston garnered the most attention, but ex-Celtic Courtney Lee also was playing his first game back at TD Garden since being traded to Memphis last season. It’s safe to say he’s pretty happy with how that deal turned out.

Did he mean a literal pay raise?

“Yeah,” the guard said with a smile. “No state taxes.”

— Green left after the game before speaking with the media.

— Celtics guard Avery Bradley said he hopes for the best for both Green and Lee and considers both  brothers. Bradley still was happy he’s one who left with the W, though.

?It?s amazing,” he joked. “I get the chance to go out there and talk crap all throughout the summer.”

— As if this story didn’t already feature enough former Celtics, news broke Wednesday night that Jordan Crawford is making a return to the States. He’s signed a contract with the Fort Wayne Mad Ants of the D-League.

— Celtics coach Brad Stevens got very heated with referee Courtney Kirkland after officials mistakenly called a 24-second violation on the C’s during the second half.

We only told you that so we could show you this photo: 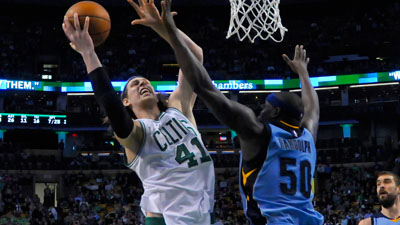