Isaiah Thomas Promises Improvement After One Of 'Worst Games Ever' - NESN.com Skip to content

BOSTON — Isaiah Thomas’ return to the Celtics’ lineup was far from a triumphant one.

Thomas rejoined his Boston teammates Wednesday night for a pivotal playoff-chase battle with the Miami Heat, but after more than two weeks of little to no basketball activity, the point guard looked like a shell of normal, explosive self.

It wasn’t pain that hampered Thomas in Boston’s 93-86 loss to Miami at TD Garden, it was rust. He said after the game that his bruised lower back felt fine — or at least, fine enough — but every aspect of his game seemed to be running at three-quarters speed.

?My body felt good,” said Thomas, who had missed the Celtics’ previous eight games, “other than when I fell one time ? (that) hurt. It?s just all the other things. Getting back in the flow of things, getting my rhythm back. I just wasn?t decisive at all. It was tough for me, probably one of my worst games I?ve ever played.”

Things were rough from the jump for Thomas, whose first stint of floor time featured a turnover, two missed 3-pointers (including one that missed the basket entirely) and three consecutive missed free throws. He had missed a total of nine freebies over his first 10 games with the Celtics.

The fall came when Thomas drew a charge late in the second quarter, with Tyler Johnson’s shoulder knocking him right onto his tender tailbone. Thomas said the pain barely registered with him, though — he was playing too poorly to worry about things like that.

The Celtics’ leading scorer finished with four points on 2-of-7 shooting, zero assists, zero rebounds and three turnovers in 20 minutes of action.

?The first time I?ve ever missed three free throws in a row,” Thomas said, shaking his head. “The first time for a lot of things. I airballed one 3-pointer. My legs weren?t there ? that?s the thing I can say the most. My legs weren?t there. I haven?t played in a while. But like I keep saying: There?s no excuses. I?ve got to play better. And I?m my biggest critic. I?ve just got to come out and play better, offensively and defensively.”

Thomas’ rough showing came during a bad night for his team as a whole. The Heat led by double digits from the 7:05 mark of the second quarter to the 5:11 mark of the fourth, with their edge reaching 22 points at its peak. The respectable margin of defeat only was made possible by a furious fourth-quarter comeback — one Thomas had no hand in.

That’s perhaps the most glaring indication of just how off Thomas was Wednesday: The team’s go-to guy in late-game situations — their closer — did not play a single minute in the final frame.

?It was tough,” Thomas said. “We just weren?t aggressive on both ends. They got whatever they wanted offensively, and then we weren?t making decisions on the offensive end for ourselves. Not to blame it all on me ? I had a lot to do with that when I got in the game. I wasn?t decisive at all. It hurt us, and I promise I?m going to do better.

?I?ll be good on Friday (when the Celtics visit the New York Knicks). I promise you that.? 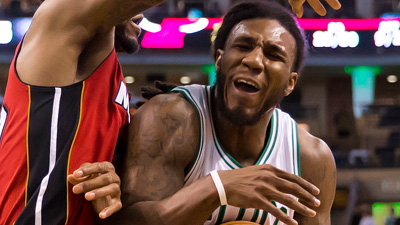