Andre Johnson’s time with the Houston Texans is all but over.

The Houston Chronicle was the first to report that the Texans wideout’s agent has been granted permission to explore a trade to get Johnson out of Houston. If there’s no trade to be made, the Texans will cut Johnson and make him a free agent, according to the report.

“It?s business,” Johnson told the paper. “I understand that side of it. I?m not angry about it. I knew at some point in time this day would come. If we were living in a perfect world, you know I?d want to finish my career here, but, unfortunately, that?s not what?s going to happen. You just have to move forward.”

Johnson will be 34 when the 2015 season begins, and the Texans don’t appear ready to contend for a Super Bowl, as they’re still in the midst of a rebuild. Johnson was also told his role would be diminished next season, which prompted him to ask for the trade.

“Why sit there and be miserable when I can go somewhere else and be able to show my talents?” he said.

The 12-year veteran certainly isn’t the player he used to be, but he probably could still be effective in the right system. He caught 85 passes for 936 yards last season, although only found the end zone three times for the Texans. Johnson has two years remaining on his current contract. He’s due $10.5 million in 2015 with a salary cap hit of $16.1 million.

Johnson was named an All-Pro first teamer twice and has been selected for seven Pro Bowls, his most recent selection coming in 2013. 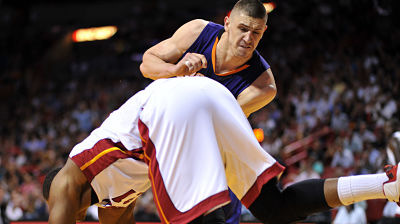