The New England Patriots’ lack of urgency in finding a dependable replacement for Shane Vereen could be explained by two running backs who took a backseat in 2014.

Most know about James White, a 2014 fourth-round draft pick who touched the ball just 14 times in three games last season, but the Patriots also have former Stanford bell cow Tyler Gaffney, a Carolina Panthers sixth-round pick whom New England claimed off waivers after the rookie tore the lateral meniscus in his left knee. The Panthers tried to sneak Gaffney through waivers to injured reserve, but the Patriots, who were willing to store him through training camp, had other plans.

Gaffney could compete with White and recently added free agent Travaris Cadet for third-down reps, but he also could threaten LeGarrette Blount, Jonas Gray and Brandon Bolden for early snaps.

Gaffney hasn’t played a whole lot of football in recent years. The multi-sport star missed all of 2014 with the knee injury, and he elected to play minor league baseball instead of college football in 2012. He made a surprise return to football in 2013 after an excellent season in the Pittsburgh Pirates’ Class Low-A organization.

Gaffney, an outfielder, hit .297 in 38 games with the State College Spikes with six doubles and five triples. He had an excellent .483 on-base percentage and .441 slugging percentage for a .925 OPS. Unsurprisingly, he also stole 11 bases with his 4.49-second 40-yard dash speed.

Giving up what could have been a successful and lucrative baseball career just shows how seriously Gaffney takes football.

Let’s break down how Gaffney could contribute to the Patriots:

PASSING GAME
Gaffney caught 15 of 18 targets in 2013 for 86 yards and one touchdown. He had two drops during the season, both on quick unexpected dump-offs from quarterback Kevin Hogan. Gaffney also backed up Stepfan Taylor in 2011, catching 12 passes for 79 yards and one TD.

Gaffney rarely left the field in 2013, and mostly was used as a pass blocker on third down. His primary role was to pick up oncoming blitzers. If no one was sent, then the running back would dart into the flat for a potential check-down pass.

Gaffney was solid in pass protection at Stanford, where he relied heavily on cut blocks to chop down bigger defenders. He’s an experienced and willing blocker who also showed off good technique when his role called for it, as in this game against Utah.

Gaffney was jarred back, but he got low and fended off the Utah defender, allowing his quarterback time to get rid of the ball.

Gaffney also occasionally split out wide at receiver. He wasn’t a big-play receiver with the Cardinal, but it also wasn’t part of his role. With his speed and sure hands, he could take on a bigger role in the passing game with the Patriots.

One of Vereen’s signature plays in the passing game was a wheel route. Gaffney proved against Army (and at the NFL Scouting Combine) that he can make a big play on that particular route.

Gaffney ran a smooth wheel route out of the backfield and stopped to make the touchdown grab.

BETWEEN THE TACKLES
Gaffney’s main role in the Cardinal offense obviously came on the ground, where he served as the team’s bell-cow back.

He has prototypical size at 220 pounds, and despite being 6 feet, he runs low and can be tough to tackle by just one defender. Gaffney’s biggest strength might be his patience and smart running style. He allows blocks to open, and he benefited from an elite offensive line, which included future pros Cameron Fleming and David Yankey as well as projected 2015 first-round pick Andrus Peat.

Gaffney showed potential to be a goal-line back at Stanford, where 11 of his 21 touchdowns came within 5 yards of the end zone on 20 attempts in 2013. He rarely lost yards and had just 23 negative plays on 330 carries. (Oddly, eight of those came in the final game of Gaffney’s college career against Michigan State.)

Gaffney also was a highly productive short-yardage back in 2013. He received 41 carries on third-and-short and picked up 165 yards, 4 yards per carry and 29 first downs. His 70.7 first-down rate on short-yardage carries rated better than LeGarrette Blount (53.8 percent) and Stevan Ridley (46.4 percent) during their respective final college seasons.

Gaffney also had 17 touchdowns on 63 carries inside the Cardinal red zone. Ridley had a similar rate during his final season at LSU, when he had 14 touchdowns on 67 red-zone carries.

Gaffney fumbled three times in 2013 and just five times in his four-year career at Stanford. He fumbled only once every 103.6 times he touched the ball. To put that in perspective, Blount has fumbled once every 56.7 times he touches the ball in the NFL, which is more frequently than Ridley (74.7).

Stanford’s offensive line did a tremendous job sealing off Arizona State’s defense, but Gaffney turned on the burners and blew by the Sun Devils’ secondary.

Gaffney does his best work between the tackles and didn’t consistently show great lateral ability at Stanford. He runs narrow, and despite his 6.78-second 3-cone and 4.18-second 20-yard shuttle, doesn’t show tremendous agility on tape. He picks up extra yards with his power, not ability to make defenders miss.

On this play, Gaffney did a nice job fending through traffic, then using sheer force to get inside the end zone.

OVERALL FIT
Patriots fans’ hopes for Gaffney are high, but it’s important to remember he was a sixth-round pick. The Patriots didn’t have a fifth-round selection last season, and Gaffney went two picks before they selected cornerback Jemea Thomas, so it’s certainly possible he could have been a fifth-rounder if New England had the opportunity to grab him earlier.

Still, Gaffney obviously has some limitations since he was a late-round pick, and coming off a knee injury isn’t easy for any player, especially one who has yet to take an NFL snap. Gaffney played behind an elite offensive line at Stanford, and while he certainly showed a powerful running style in college, it’s debatable if that can translate to the NFL, where defenders are bigger, stronger and faster.

Gaffney had versatility, however, and that’s something the Patriots love. The Cardinal trusted him in a number of roles, and his pass-blocking reps could come in handy since Cadet has little experience in that department.

Having Gaffney might not preclude the Patriots from drafting another running back in late April, but the position becomes less of a need because of his potential. This year’s draft is loaded with running backs, but Gaffney is more athletic than most of the players available.

There’s a reason the Patriots were willing to store Gaffney, and since he was in Foxboro for most of last season, he’s already ahead of any incoming rookie on the mental side. Getting Gaffney for free last season might wind up looking like a steal by the end of next season.

But no, sorry, he can’t play cornerback. 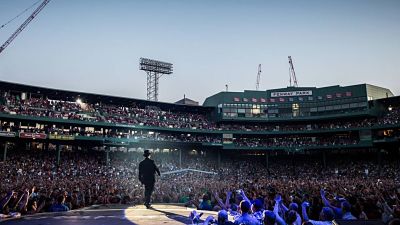 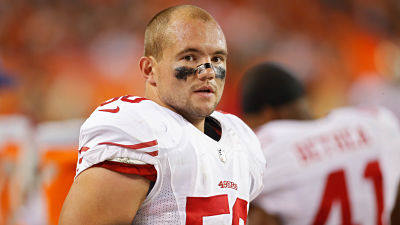