Well, Betts probably gained a whole bunch of fans with his epic performance in the Boston Red Sox?s 9-4 win over the Washington Nationals in the 2015 opener at Fenway Park. But one fan, Nats outfielder Bryce Harper, can relate to Betts on a unique level, as both major leaguers are 22 years old and poised for great things in The Show.

“It’s a lot of fun right now,” Harper said after Monday?s game, according to WEEI.com. “You’ve got guys like Mookie, (Xander) Bogaerts, (Manny) Machado, (Mike) Trout, Kris Bryant when he comes up. You’ve got a lot of guys coming up and doing things people want to see. That first inning, Mookie took over. He’s electric.

“You hear about (Betts). I know he was a second baseman, but he saw (Dustin) Pedroia over there and now he’s a damn good center fielder. You get excited by a young guy. It’s a lot of fun to watch a guy like that. As long as you can play, that’s all that matters, and he’s a great player.”

Betts completely dominated in the first two innings Monday, taking over the game about as much as a single position player can. He robbed Harper of a home run, swiped two bases on one play en route to scoring a run and clubbed a three-run homer into the Monster seats.

Harper, who has done some damage for the Nationals since breaking into the majors in 2012, couldn?t help but marvel at the effort, even though he was victimized by Betts? amazing performance.

“Everybody talks about Mookie, Addison Russell, Kris Bryant, there are so many guys that are so good at that age,” Harper said, according to WEEI.com. “I played against a lot of them, but I never played against Mookie. Seeing what he did (Monday), that bat speed he has, the running ability that he has, being able to play center field like he does, he’d be in the lineup every day for me if he was mine.

“He’s an unbelievable ballplayer, he’s a lot of fun to watch, and I wish he wouldn’t have robbed that homer.”

It?s amazing to think Betts is nine days older than Harper, as the Nationals outfielder already is a two-time All-Star in the midst of his fourth big league season. But Betts looks ready to prove he?s in Harper?s class, even if it?s still way too early to pass judgment on either player given their youth. 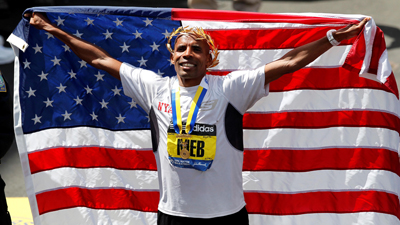