Avery Bradley’s return to the NBA playoffs after a one-year absence was a forgettable one.

The Boston Celtics guard was a non-factor in Sunday’s 113-100 loss to the Cleveland Cavaliers, going 3-of-10 from the floor and 1-of-6 from 3-point range to finish with seven points. It was just the third time in his last 19 games that Bradley had failed to crack double figures.

?I just feel like they made it tough on me,” Bradley told reporters after the Game 1 loss. “I have to come out next game and find ways to get myself easier shots.”

Bradley sat out Boston’s regular-season finale with a bruised quad, but he said the injury did not hinder him Sunday. Instead, he blamed his struggles on Cleveland’s defensive game and the simple fact that he missed several shots he typically makes.

?I feel like it was a little bit of both,” Bradley said. “They did do a good job of trying to make it tough on me, top-blocking me. And at the same time, I took some tough shots that I usually make, and tonight I wasn?t knocking them down.

?I think all three of Avery?s field goals ? maybe two of the three ? came in the second half,” Celtics coach Brad Stevens added. “He just wasn?t getting a lot of room. They did a good job of smothering him and defending him. With that said, you become a spacer, you become a screener, you become a guy that helps others, and hopefully at some point, that opens up. But credit to (the Cavs) for doing that.”

The Celtics have much to improve upon if they hope to reverse their fortunes in Game 2, but Bradley is confident in his team’s ability to do so.

?I don?t feel like we were aggressive on either end of the floor consistently, especially in the first half on the defensive end, but we improved in the second half,” he said. “But we definitely can play better. We know that, and I think they know that. We just have to go out there and prove it on Tuesday.”

Some additional notes from Game 1:

— Kelly Olynyk, like eight of his Celtics teammates, made his postseason debut Sunday, and the second-year big man impressed in his relatively brief outing.

Olynyk scored 12 points on 5-of-7 shooting in his 18 minutes of action, including 10 in one 4:26 span during the first quarter.

?I think it helps when you get a layup right off the bat, when he checked in,” Stevens said. “That makes you feel good. You see the ball go through the net. It happens very quickly in your time in the game. You could tell he was pretty locked in offensively early on. We need that. And we hopefully can bottle that up and keep it going.”

Olynyk’s impact on the game lessened after that strong first stint. His final made field goal came less than two minutes into the second half, and his 2:33 of fourth-quarter playing time came after the outcome already was decided.

?It just didn?t come my way as much,” said Olynyk, who picked up his fourth foul with more than 16 minutes remaining. “I missed one. It happens, and then they were out and running.”

— Browns quarterback Johnny Manziel, who briefly owned the title of “Most Famous Cleveland Athlete” before James returned home last summer, was in the house. — The graphics operators over at ESPN seemed to mixed up Brandon Bass with ex-Celtic Brandan Wright.

— James, as expected, was the beneficiary of a few questionable calls during the first half, including a seemingly obvious foul on Tyler Zeller and this block, which looked a whole lot like goaltending:

Stevens agreed. The coach could be heard yelling, “That was an easy one!” from the Boston bench. 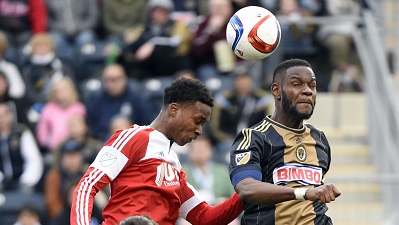 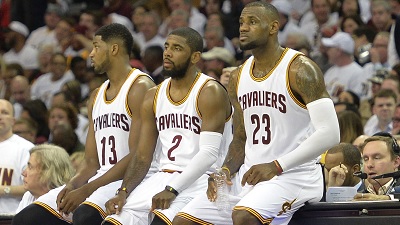 LeBron Watch: The King Is Carried By Cavs Teammates In Playoff Opener