If Kevin Garnett is looking for something to do when his basketball career ends, he might have a future in baseball.

The former Boston Celtics big man returned to the Timberwolves at this season’s NBA trade deadline, and his homecoming in Minnesota has been a special one. On Monday, Garnett had the honor of throwing out the first pitch at the Minnesota Twins’ home opener at Target Field, all while decked out in a Kirby Puckett jersey.

Duke star Tyus Jones, a Minnesota native, delivered the ball to KG, who proceeded to throw a strike to Torii Hunter.

The Twins might want to see what Garnett is up to now that the T-Wolves have been eliminated from the playoffs, as Minnesota sat at 1-5 before Monday’s contest against the Kansas City Royals. 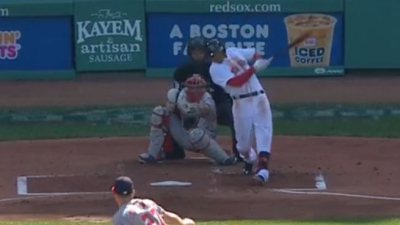