The New England Patriots will need to find a starting running back to begin the 2015 NFL season.

LeGarrette Blount is suspended one game for violating the league’s substance abuse policy, according to an NFL spokesperson. Blount, then a member of the Pittsburgh Steelers, was arrested in August 2014 with teammate Le’Veon Bell for marijuana possession. Since Blount’s suspension stems from last season, it’s likely the Patriots knew this was coming.

The charges against Blount were dropped in January after he completed 50 hours of community service.

Blount was released by the Steelers after he walked off the field early during Pittsburgh’s Week 11 27-24 win over the Tennessee Titans. Blount didn’t receive any carries in the game. He was signed by the Patriots after clearing waivers and ran for 78 yards on 12 carries with two touchdowns in Week 12.

Blount finished the season with 125 carries for 547 yards with five touchdowns. He added 47 carries for 189 yards and three touchdowns in the playoffs.

The 28-year-old running back spent the 2013 season with the Patriots before leaving for the Steelers in free agency.

Stevan Ridley, who began the 2014 season as the Patriots’ starting running back, is still a free agent. The Patriots have Jonas Gray, Brandon Bolden and Tyler Gaffney on the depth chart behind Blount. They also might draft a running back, since Blount’s contract runs out after the upcoming season. 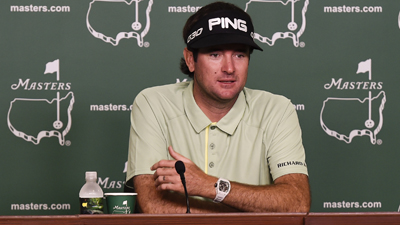 Bubba Watson Responds To Negative Poll: ‘I Need To Improve As A Man’