NEW YORK — A baseball game broke out at Yankee Stadium. And then another one followed.

OK, so it technically was the same game, but the Red Sox and Yankees decided to treat Friday night and Saturday morning as if the schedule called for a doubleheader. The teams played 19 innings before Boston finally prevailed 6-5 in the longest game (in terms of time) in Red Sox history.

The game lasted six hours, 49 minutes. And that’s not even counting the 16-minute delay that occurred in the 12th inning because a section of lights on the facade went out, prompting the umpires to stop play.

There will be no rest for the weary, either, as the Red Sox and Yankees are scheduled to play the middle game of their three-game series Saturday at 1:05 p.m. ET. (That’s roughly 11 hours after Garrett Jones grounded into a double play to end the game that started Friday night at exactly 7:08 p.m.)

Because so much occurred in Friday’s battle for the ages, let’s run down some of the more memorable moments, with videos where appropriate. Follow along if you can. It was a wild ride.

— Edward Mujica, who was appointed Boston’s primary closer with Koji Uehara sidelined with a hamstring injury, entered in the ninth inning with the Red Sox leading 3-2.

Pablo Sandoval had knocked in a run in the first inning, Daniel Nava had driven in two runs in the sixth inning and Robbie Ross Jr. had wiggled Boston out of trouble in the bottom of the sixth. Catcher Sandy Leon also threw out Brett Gardner trying to steal second base in the eighth inning with a beautiful throw.

Mujica retired Mark Teixeira and Brian McCann, but Chase Headley wasn’t prepared to go quietly. The right-hander threw a pitch right down the middle that Headley crushed out of the yard.

— Xander Bogaerts made a critical defensive play in the 11th inning.

Headley, batting with runners at first and second, hit a ground ball into the hole that Bogaerts fielded on the back hand. The 22-year-old shortstop, who probably wouldn’t have made such a play last season, had the presence of mind to toss to third base to record the third out there.

Credit Sandoval for recognizing Bogaerts’ whereabouts and choosing to cover the bag rather than overpursuing the baseball.

— This happened in the 12th inning. Twitter was buzzing, as you’d imagine.

— Jacoby Ellsbury lifted a fly ball into shallow left field with a runner on first base and the score tied 3-3 in the 12th. Hanley Ramirez took a strange route but made an important tumbling catch.

— It was a rather lackluster night at the plate for David Ortiz until the slugger broke a 3-3 tie in the 16th inning with a clutch home run into the right field seats.

At that point, it seemed like the game was over.

Tex evened the score moments later with a home run of his own off knuckleballer Steven Wright, who entered before the 15th inning.

— The Yankees had the potential winning run at third base in the 16th after Headley walked and Stephen Drew singled into right field.

Didi Gregorius, aka Derek Jeter’s replacement, couldn’t push across the game-winner. He grounded to Mike Napoli at first base.

— Gardner walked with one out in the 17th inning but inexplicably was picked off first base.

— Sandoval put the Sox in front 5-4 in the 18th inning with an RBI single.

Esmil Rogers, who clearly was laboring, struck Pedroia with a pitch to begin the inning. The second baseman went from first to third when Ramirez singled and scored on Sandoval’s knock.

Ramirez was thrown out trying to go from first to third — an ill-advised move — and it ended up being rather important given what transpired minutes later.

Brian McCann led off the bottom of the 18th with a double, and Carlos Beltran tied the game 5-5 with a double over Ramirez’s head in left field.

Beltran advanced to third base on Drew’s ground out, but Wright rebounded to retire Gregorius. Gregorius, as he did in the 16th, grounded to the right side for the inning’s final out.

— Bogaerts, who reached base five times (four singles and a walk) in extra innings, led off the 19th inning with a base hit. He stole second base, advanced to third base on a passed ball and scored the eventual winning run when Mookie Betts lifted a sacrifice fly to center field.

— Wright, pitching his fifth inning of relief, surrendered a leadoff single to Ellsbury in the bottom of the 19th, but Jones grounded into the game-ending double play to complete a crazy night at the yard. 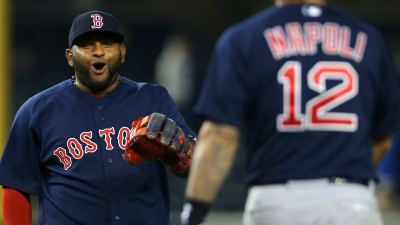 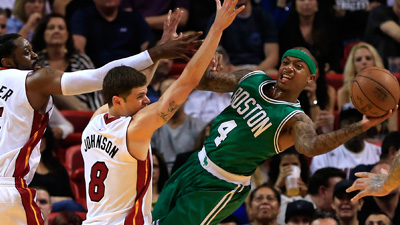