Before you shoot, understand that?s merely to say Porcello provided exactly what Boston needed in a 9-4 win over the Washington Nationals in the club?s home opener at Fenway Park. The sooner everyone forgets the ?ace? label, the better, as it?s pointless to search for what currently doesn?t exist in Boston?s rotation, but Porcello showed the poise and maturity of a leader in his first win in a Red Sox uniform.

“It was special to me,” Porcello said after Monday?s victory. “It’s something I’m not going to forget. It was a lot of fun. I can’t really put it into words right now, but it was exciting and, like I said, a huge honor.”

To say Boston doesn?t have an ace isn?t a knock on any one individual at this point. There?s potential within the rotation, but someone must emerge from the group in order to have the label bestowed upon him. And even then, it?s all contextual, as an ace on the Red Sox?s pitching staff might not be an ace on, say, the Los Angeles Dodgers, who roll out both Clayton Kershaw and Zack Greinke every turn through.

But the Red Sox needed Porcello to take the first step Monday toward justifying the four-year, $82.5 million contract extension he signed last week. Boston?s bullpen was taxed over the weekend, first by a 19-inning game Friday against the New York Yankees and then because of a lackluster performance Sunday by Clay Buchholz. And Porcello answered the call with an eight-inning performance that was more than enough on a day when the Red Sox?s offense scored nine runs and pounded 13 hits.

“He went out and he established his fastball early on,” Red Sox manager John Farrell said. “We know we’re going up against a very aggressive swinging team, so you can make some quality pitches early in the count. Hopefully get some quick outs. That seemed to be the case.

?They’re dangerous obviously. Leave some pitches over the plate, and they’ll drive the ball out of the ballpark, which happened on a couple of occasions. But Rick gave our bullpen a much-needed day to recoup and recover after the weekend series in New York.”

Porcello wasn?t dominant against the Nationals. He allowed four runs (three earned) on four hits, including two homers. He struck out six, walked one and battled at times. But the fact he stuck around for 112 pitches and eight frames, in addition to posting zeros at key points after the Red Sox seized control early, spoke volumes about his composure at age 26.

It wasn?t like Monday?s home opener was a must-win. Far from it, in fact. But with Buchholz laying a dud on national television Sunday night, the Red Sox needed some assurance that such efforts won?t have negative trickle-down effects on the rest of the rotation.

?It?s good to come back with a win after a tough loss,” Porcello said. “The other guys didn?t get a lot of sleep. For them to come out and swing the bats and play defense like they did was exceptional. It?s nice to win at home, obviously, for the home opener, so it was a good win and we?ve got to keep it going.?

Porcello might never be an ?ace? in the traditional sense. And a legitimate No. 1 starter might never emerge from this year?s Red Sox team. But if someone is going to grab the reins and lead the Red Sox?s starless pitching staff, Porcello seems like as good a candidate as any. 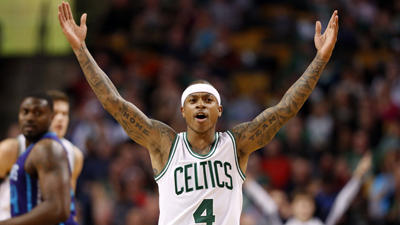