Trevor Bauer was more than ready for a fight Monday night.

The Cleveland Indians pitcher took a light-hearted approach to opening a three-game series with Major League Baseball’s newest bad boys, the Kansas City Royals. Bauer could be seen in the dugout early in the game wearing a pair of boxing gloves, presumably to protect himself in case any sort of brawl started.

A brawl isn’t out of the question for teams playing the Royals this season. Already in 2015, the Royals have had dust-ups with the Los Angeles Angels, Oakland Athletics and Chicago White Sox. Then again, maybe Bauer’s just really excited about the Floyd Mayweather-Manny Pacquiao fight. Or his hands are cold. Who knows.

Bauer will get his chance to knock out the Royals on Tuesday when he gets the start on the mound for Cleveland. 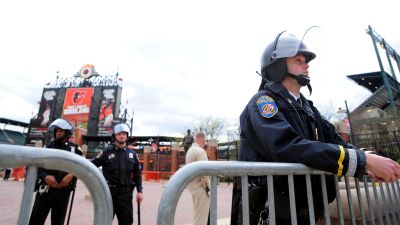