Zach Trotman started the 2014-15 season with the Providence Bruins, but by the end of the campaign, he was an important part of a Boston Bruins blue line that was ravaged by injuries.

“Obviously started off two games of NHL experience,” Trotman said. “Started off in the AHL and then due to injuries and whatnot I got a chance to come up here and play quite a few games which was a big step forward for me as far as experience goes and kind of getting my foot in the door. I felt like I was able to learn a lot and get a lot of experience from my time up here.”

Trotman spent 17 games with Boston from Oct. 25 through Dec. 17. He went back to Providence and played well, which helped earn him another chance at the NHL level when Dougie Hamilton suffered an undisclosed injury March 21 against the Florida Panthers.

Trotman played the majority of his even-strength ice time over the final 10 games alongside Zdeno Chara on Boston’s top pairing, which was Hamilton’s role before his injury. The Bruins controlled 53.88 percent of even-strength shot attempts with this duo on the ice, and they also had a 66.8 goals-for percentage when paired together.

“It?s awesome,” Trotman said of playing with the B’s captain. “Obviously he?s a legend. I make a mistake and he covers up for me. It makes my job a lot easier and it?s nice to be able to learn from someone like that and play with someone like that. I always felt that?s how you learn the most and gain the most experience is when you can play alongside someone like that.”

Playing with Chara put Trotman up against opponents’ top lines and tough zone starts, but the 24-year-old handled it well. He made the smart, simple plays and used his size and length to win puck battles in the defensive zone. The 2010 seventh-round draft pick is a prototypical defensive defenseman.

Trotman’s play in his second recall, although only a 10-game sample, is enough to warrant strong consideration for a top-six role heading into next season. There could be a spot or two open on the blue line depending on what happens in the offseason with Adam McQuaid and Matt Bartkowski, both of whom are eligible for unrestricted free agency July 1.

“I hope so,” Trotman said when asked about being in Boston on a full-time basis in 2015-16. “I felt real good about my game, obviously. It wasn?t enough there towards the end of that stretch, but I feel confident in my abilities to make a push.”

Didier Drogba Not Ready To Retire, Vows To Play Beyond 2014-15 Season 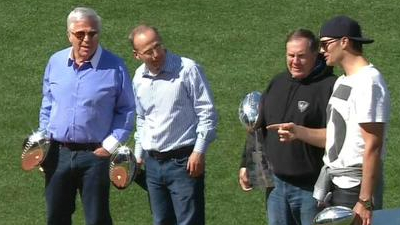