New England Patriots owner Robert Kraft isn’t happy with the Wells Report findings, and it’s easy to see why: It doesn’t look good for his team.

The Wells Report determined through a series of texts, interviews and video evidence that it was “more probable than not that New England Patriots personnel participated in violations of the NFL Playing Rules and were involved in a deliberate attempt to circumvent those rules” by deflating the team’s footballs in the AFC Championship Game against the Indianapolis Colts.

Here are the biggest takeaways from the 243-page report, which was released Wednesday:

— When officials measured the Patriots’ footballs at halftime, all 11 were under the minimum 12.5 PSI inflation, according to the Wells Report. The officials had time to test just four Colts footballs because they ran out of time before play was set to resume. All four met the required inflation standard.

Here are the readings: — Referee Walt Anderson tested the Colts and Patriots footballs prior to the game but didn’t record his readings, the Wells Report reads. He found 10 of the Patriots’ 12 footballs met the minimum inflation while two were under-inflated. He over-inflated those footballs, then brought them back down to 12.5 PSI with a needle. Anderson tested all 12 of the Colts’ footballs, and all 12 were around 13 PSI. He neither added nor removed air from the Colts’ footballs.

— The Wells Report read it was “more probable than not that Jim McNally and John Jastremski participated in a deliberate effort to release air from Patriots game balls after the balls were examined by the referee.” McNally is the officials locker room attendant for the Patriots, while Jastremski is an equipment assistant.

— The Wells Report determined it was more probable than not that Brady was at least generally aware of the inappropriate activities of McNally and Jastremski.

— The Wells Report found no wrongdoing or knowledge of wrongdoing by ownership, Patriots head coach Belichick or any other New England coach.

— McNally took both bags of footballs to a bathroom in Gillette Stadium for 1 minute and 40 seconds, video evidence showed. Exponent, one of the country’s leading scientific and engineering consulting firms, determined a person can deflate 12 footballs in that amount of time. McNally initially told the NFL he took the footballs straight to the field. He then had varying stories on why he entered the bathroom, according to the report.

— McNally and Jastremski exchanged a number of texts in May and October 2014, in which McNally refers to himself as “the deflator.” Jastremski also mentioned a “needle,” and McNally said he was “not going to ESPN … yet.”

— The Colts told the NFL before the game that they suspected the Patriots were using under-inflating footballs, according to the report. After Brady threw an interception in the first half, the Colts tested that ball on the sideline with a pressure gauge and determined it was under-inflated.

— The Wells report reads: “According to Exponent, regardless of the assumptions made with respect to the gauges used pre-game and at halftime, the measurements recorded for the Patriots game balls at halftime cannot be entirely explained by the Ideal Gas Law (or variations thereof) when applied to the most likely game conditions and circumstances. Exponent also concluded that the difference in the magnitude of the reduction in air pressure between the Patriots and Colts footballs based on the halftime measurements is statistically significant.”

— The Wells Report reads: “On January 10, 2015, immediately prior to the game between the Patriots and the Ravens, in the Patriots equipment room with both Brady and Jastremski present, McNally received two footballs autographed by Brady and also had Brady autograph a game-worn Patriots jersey that McNally previously had obtained.” Brady denied knowing McNally or his in-game responsibilities to Wells.

— The Wells Report found Brady and Jastremski started speaking more via phone and text after the AFC Championship Game. They previously hadn’t communicated via phone in six months. Brady also invited Jastremski into the Patriots’ quarterback room for the first time in Jastremski’s 20 years with the team.

— The Wells Report determined it is unlikely two Patriots staffers would deflate footballs without Brady’s knowledge or permission.

— Brady didn’t submit texts or emails to the investigation when requested. 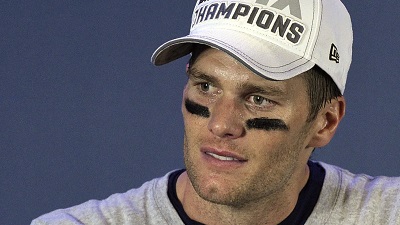 Tom Brady Sr. Livid About Wells Report: ‘This Was Framegate’ On My Son