BOSTON — Hanley Ramirez couldn?t dodge the wall. But he might dodge a stint on the disabled list.

Red Sox manager John Farrell said Monday after Boston?s 5-1 loss to the Tampa Bay Rays that outfielder Hanley Ramirez is ?day to day? with a left shoulder sprain. Ramirez exited Monday?s game in the first inning after crashing into the wall in foul territory in the left field corner.

?We?re hopeful over the next couple of days there?s some improvement,? Farrell said after Monday?s loss. ?There?s no clear-cut DL at this point. So he?s day to day.?

James Loney hit a sinking fly ball down the left field line that Ramirez aggressively pursued with two outs in the first inning. Ramirez initially appeared to make the catch, but the force of his shoulder-first collision with the wall caused the ball to pop out of his glove and roll back toward the Green Monster.

Ramirez tracked down the baseball and flung it back toward the infield as Loney coasted into second base with a double, but the damage was done. The 31-year-old outfielder grabbed his shoulder and dropped to the ground in pain as Farrell and the Red Sox?s medical staff tended to him.

?He goes full tilt after a play in which he makes the catch, and then unfortunately with the wall being right there, that?s kind of scary,? Farrell said. ?The ground that he can cover when he?s going full tilt and the force that he?s going to create because of his size, that?s a scary moment.?

While the initial prognosis is good, in that scans performed Monday night didn?t show anything more than a sprain, Farrell was unclear after the game as to how long Ramirez will be sidelined. Right now, the Red Sox are holding their collective breath.

?In the short run, we?re going to miss him,? Farrell said. ?But yeah, hopefully this doesn?t turn into something more than at least the initial exam. Like I said, any kind of soreness, we?ll have a better read on that in the coming days. I don?t know how else to give you a read on that.?

Ramirez, who signed a four-year, $88 million contract with Boston over the offseason, leads the Red Sox with 10 homers and 22 RBIs. Losing him for any period of time obviously would be a huge blow. 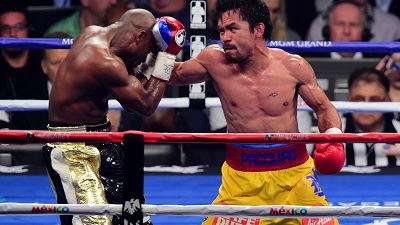 Manny Pacquiao To Have Surgery Repairing ‘Significant Tear’ In Shoulder