We all know baseball is a team sport, but let’s be honest: Mike Trout was the reason the Los Angeles Angels didn’t lose Wednesday night.

Trout’s club was tied with the Colorado Rockies in the 10th inning when Rockies shortstop Troy Tulowitzki smacked a bomb to left center field. Enter Trout, who ran back to the wall and executed the most casual home run rob ever.

But the 23-year-old was far from done.

Just one inning later, Colorado was threatening to score with a runner on third and one out. Re-enter Trout, who made a great running catch and fired a perfect throw to home plate. The umpire initially ruled baserunner Carlos Gonzalez safe but overturned it upon review.

Trout probably would have continued to save his team’s collective behind, but Albert Pujols hit a walk-off sacrifice fly in the bottom of the 11th to give Los Angeles a 2-1 win.

Needless to say, Trout’s teammates were quite impressed.

“Every day, it seems like he does something I’ve never seen before,” Angels outfielder Collin Cowgill told reporters after the game, via The Associated Press. “It’s a privilege, man.” 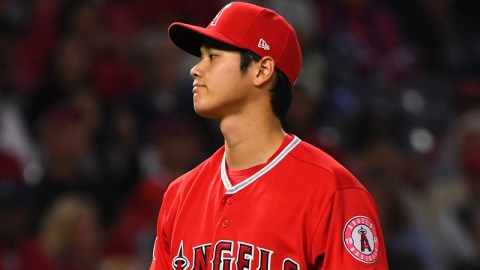