Four New England Patriots fans took their outrage to a new level Tuesday — and received some publicity in the process.

It started with a makeshift protest outside the NFL’s offices in New York, as a handful of supposed Patriots fans picketed in protest of quarterback Tom Brady’s DeflateGate suspension. A photo of the fans quickly went viral and was passed around Twitter.

Shortly thereafter, though, it was revealed the Patriots fans actually were bloggers from Boston-based Barstool Sports. In addition to protesting the league’s decision to suspend Brady for four games, the bloggers pulled off a pretty good publicity stunt.

They eventually moved inside to the league’s office building, where they hosted a “sit-in” of sorts. The bloggers handcuffed themselves together and sat in the lobby.

The group also broadcast the protest via live-streaming app Periscope, filming an eventual interaction with the police. Cops calmly asked the bloggers if they were willing to be arrested for their stunt, which they admitted they were. Moments later, cops arrived and the “protesters” were arrested. 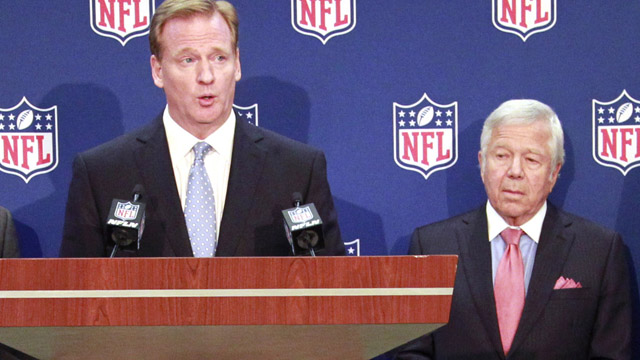