SAN JOSE, Calif. — Abby Wambach scored twice and the U.S. defeated Ireland 3-0 on Sunday in an exhibition game in preparation for the 2015 FIFA Women’s World Cup.

Defender Julie Johnston, who has made just 10 international appearances, added a goal to extend her scoring streak to three consecutive games.

It was the Americans’ fifth consecutive shutout, and goalie Hope Solo added to her U.S. record with the 83rd of her career. Wambach padded her career scoring record of 180 goals, and Sunday’s game was her 44th with multiple goals.

The sold-out exhibition at San Jose’s new Avaya Stadium was part of a send-off tour for the Women’s World Cup, which starts next month in Canada. The Americans head to Carson, California, next Sunday for a match against Mexico.

For Mother’s Day, the players brought their moms on the field for the pregame ceremony.

Wambach first scored in the 42nd minute, a short time after Irish defender Meabh De Burca got nailed by a ball straight to the face and crumpled in front of the goal.

Wambach scored again on a header less than three minutes later on a cross from Carli Loyd.

The U.S. is now 11-0-0 all-time against Ireland, which is currently ranked No. 31 in the world and isn’t among the 24 teams playing in the World Cup.

The United States opens the World Cup on June 8 with a group play match against Australia in Winnipeg, Manitoba. Women’s soccer’s premier tournament is being played in six Canadian cities over the course of about a month, with the final set for July 5 in Vancouver, British Columbia.

The Americans are in Group D with Australia, Nigeria and Sweden.

A sellout crowd of 18,000 fans attended Sunday’s match at the new home of the San Jose Earthquakes. 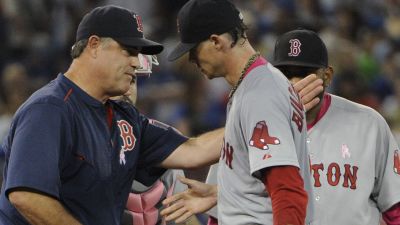