The Wells Report finally was released Wednesday, with more than 240 pages of information to comb through. Some of the most interesting tidbits, though, centered around New England Patriots quarterback Tom Brady.

The report concluded it was “more probable than not that New England Patriots personnel participated in violations of the Playing Rules and were involved in a deliberate effort to circumvent the rules.”

Additionally, the report states “it also is our view that it is more probable than not that Tom Brady (the quarterback for the Patriots) was at least generally aware of the inappropriate activities” by a pair of team employees.

The two Patriots employees in question are Jim McNally, the officials locker room attendant, and John Jastremski, an equipment assistant. According to the report, those two “participated in a deliberate effort to release air from Patriots game balls after the balls were examined by the referee.”

The Wells Report uses text messages between McNally and Jastremski in an attempt to show Brady was “at least generally aware” of what they were doing.

One exchange went like this:
McNally: Tom sucks…im going make that next ball a (expletive) balloon
Jastremski: Talked to him last night. He actually brought you up and said you must have a lot of stress trying to get them done…
Jastremski: I told him it was. He was right though…
Jastremski: I checked some of the balls this morn… The refs (expletive) us…a few of then were at almost 16
Jastremski: They didnt recheck then after they put air in them
McNally: (Expletive) tom …16 is nothing…wait till next sunday
Jastremski: Omg! Spaz

The two also spoke Oct. 23, three days before the Patriots’ game versus the Chicago Bears:
Jastremski: Can?t wait to give you your needle this week 🙂
McNally: (Expletive) tom….make sure the pump is attached to the needle…..(expletive) watermelons coming
Jastremski: So angry
McNally: The only thing deflating (Sunday)..is his passing rating

The next day, the two exchanged these texts:
Jastremski: I have a big needle for u this week
McNally: Better be surrounded by cash and newkicks….or its a rugby sunday
McNally: (Expletive) tom
Jastremski: Maybe u will have some nice size 11s in ur locker
McNally: Tom must really be working your balls hard this week

Even before the season, McNally, who referred to himself as “the deflator,” lobbied Jastremski for more free gear:
McNally: You working
Jastremski: Yup
McNally: Nice dude….jimmy needs some kicks….lets make a deal…..come on help the deflator
McNally: Chill buddy im just (expletive) with you ….im not going to espn……..yet

According to the report, it was requested that Brady turn over his electronic records (text messages, emails), but he refused.

The NFL reportedly is considering discipline for Brady, McNally and Jastremski, ESPN’s Adam Schefter reported shortly after the report was released. 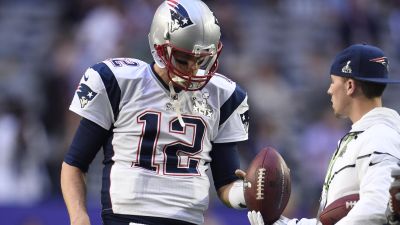