When asked during Tuesday’s introductory news conference how Rozier had climbed up the Celtics’ draft board, Ainge said he hadn’t. He’d been there all along.

“He was always that high on our draft board,” the Celtics’ president of basketball operations said. “For the last couple of months, he’s been a guy we have known and looked about and thought was very underrated based on the media and how they perceived him.

“But I think that Terry, though the quality of player that he is, was moving up rapidly in the last few weeks of the draft process as far as the attention he was getting around the league. And that started scaring us, because we thought that we had sort of a diamond in the rough that nobody really was valuing all that much.”

Initially a player Boston was targeting with its second first-round pick (No. 28), Ainge said it soon became clear Rozier would be long gone by that point.

“We just liked Terry from the very beginning,” Ainge said. “I was getting a little nervous that he was moving up too high in the draft. If another week had gone by, he might have been rated much higher. I think he went from 50 to 20 in the last two or three weeks of the process. There was a time where we thought maybe we could get him at No. 28, but that was very clear on draft day that that was not going to happen. … We knew he wouldn’t be there 12 picks later.”

Ainge said the Celtics also considered trading down from the 16th pick with the hopes of nabbing Rozier a few spots later but ultimately did not want to risk another team snatching him up.

“We entertained some of that,” he said, “but our intel was that we should not.”

Rozier, who came in for two pre-draft workouts with the Celtics, chose to leave Louisville for the NBA after his sophomore season. He credited Cardinals (and former Celtics) coach Rick Pitino with helping him make that decision.

“My whole sophomore season, I kind of had the confidence that I’d be ready to play at the next level,” Rozier said. “It was just more of, ‘How far can we go? How can I help my team? How can I be a leader to my college team?’ And once it was all over, me and Coach P. sat down. He felt that I was ready. He’d been saying that all year.

“It was big to have a guy like him in my corner who’s just been around the game and knows so much. I’ve always respected him since I met him. That’s what pretty much came into play — hearing it from him. And I had to go look myself in the mirror and ask myself, ‘Was I ready?’ And I felt I was ready.” 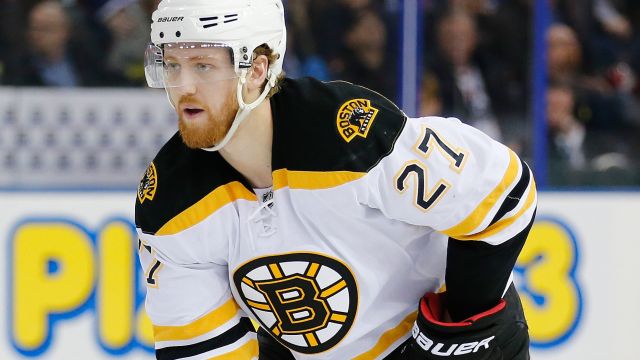 Dougie Hamilton ‘Excited’ To Play For Flames, Not Interested In Discussing Past