Max Scherzer sure is earning that new contract.

Scherzer, who signed a $210 million deal with the Washington Nationals over the offseason, came within one strike of throwing a perfect game Saturday against the Pittsburgh Pirates at Nationals Park. The right-hander instead settled for a no-hitter as the Nats blanked the Bucs 6-0.

Scherzer recorded two quick outs in the ninth inning before engaging in an eight-pitch battle with Jose Tabata. Scherzer’s eighth offering of the at-bat struck Tabata on the elbow, with the Pirates outfielder appearing to lean into the pitch to earn a free pass to first base.

Scherzer rebounded to retire Josh Harrison via a flyout to left field to cap his first career no-hitter and the Nationals’ second no-hitter in two seasons. Jordan Zimmermann tossed a no-no in 2014.

Scherzer nearly tossed a no-hitter in his last start Sunday against the Milwaukee Brewers, but Carlos Gomez broke up that bid with a single in the seventh inning. The 30-year-old ended up firing a complete-game, one-hit shutout against Milwaukee, though, meaning Scherzer has allowed just one hit, one walk and one hit batter over his last two starts combined. He struck out 26 in the two outings, as he fanned 10 on Saturday after striking out 16 on Sunday against the Brew Crew.

Talk about an ace, in every sense of the word. 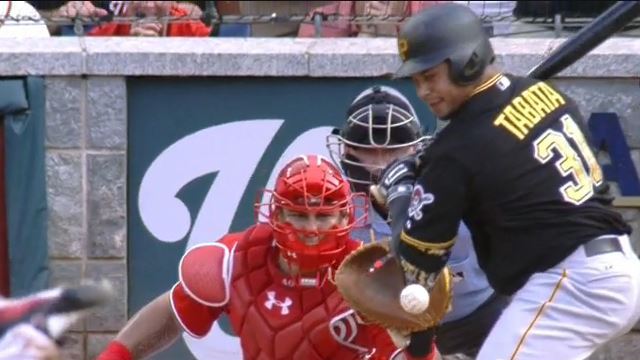