10:14 p.m.: Another trade! The Toronto Maple Leafs sent the 29th pick to the Columbus Blue Jackets and received Nos. 34 and 68 in return.

10:10 p.m.: The Islanders have been busy tonight. They just acquired the 28th pick from the Tampa Bay Lightning in exchange for the 33rd and 72nd selections.

9:43 p.m.: We have another trade, this one involving only draft picks.

8:49 p.m.: After a relatively quiet hour on the trade front, the Oilers and Islanders have made a move. New York sent defenseman Griffin Reinhart to Edmonton in exchange for the 16th and 33rd overall picks.

7:31 p.m.: After speculation galore that the Arizona Coyotes would trade the third overall pick, they ultimately do not, choosing instead to draft center Dylan Strome — an OHL teammate of top pick Connor McDavid.

7:15 p.m.: TSN’s Darren Dreger has the details of the Ryan O’Reilly-to-Buffalo deal.

6:52 p.m.: Avalanche forward Ryan O’Reilly could be on his way to Buffalo.

5:43 p.m.: Remember when we said all these Bruins draft picks might be setting up an additional move? Well …

5:43 p.m.: The Bruins have made the Lucic trade official.

5:03 p.m.: According to multiple reports, the final piece of the Lucic return is defenseman prospect Colin Miller, who impressed with the AHL’s Manchester Monarchs this season.

Others are reporting the deal, as well, and we’ll bring you the details as they become available. The trade reportedly will include the No. 13 pick in tonight’s draft, as well as Kings backup goalie Martin Jones.

That would give the Bruins the 13th, 14th and 15th picks. Could another trade be forthcoming?

4:15 p.m.: Now that they’ve taken care of the Dougie Hamilton deal, could the Bruins be entering the Patrick Sharp market? Could be, according to a report out of Chicago.

3:35 p.m.: The Dougie Hamilton trade is official. The defenseman is heading to Calgary in exchange for the Flames’ first-round pick (No. 15), as well as two second-round picks (Nos. 45 and 52).

3:26 p.m.: The Bruins aren’t getting anything but draft picks in return for Dougie Hamilton, according to multiple reports.

3:13 p.m.: It’s all but official: Dougie Hamilton has been traded to the Calgary Flames, according to multiple reports. It’s unknown at this point who’s coming back in the deal.

3:11 p.m.: Dougie Hamilton is heading to Calgary, according to Elliotte Friedman.

3:08 p.m.: The latest on Dougie Hamilton has to do with the Calgary Flames, who have not only reportedly entered the sweepstakes, they might be leading the race.

2:55 p.m.: It’s incredible how much of the day’s rumors have had to do with the Bruins, or more specifically, Milan Lucic and Dougie Hamilton. Trade talks for the latter, according to The Globe and Mail’s James Mirtle, are starting to intensify.

2:30 p.m.: The Milan Lucic rumors won’t go away, and it sounds like the Los Angeles Kings are trying to restart trade talks with the Bruins.

1:40 p.m.: Patrick Sharp, one of the veterans mentioned earlier when talking about the Chicago Blackhawks, has been one of the most talked-about trade pieces in recent months. That’s obviously intensifying, and it looks like a list of suitors is being built.

Interesting to note: Montreal general manager Marc Bergevin is very familiar with Sharp, as he used to work for the Blackhawks.

1:30 p.m.: The Chicago Blackhawks are about to find out how much it costs to win a Stanley Cup — literally. The Hawks reportedly are shopping a few of their core players in their quest to make some salary-cap space.

1:25 p.m.: It still seems a little crazy to think the Bruins might trade Dougie Hamilton, but here we are. According to Aaron Portzline of The Columbus Dispatch, talks are intensifying between the Bruins and Arizona Coyotes.

12:38 p.m.: This isn’t trade-related, but it is a bit of Bruins news. Here’s the latest on restricted free-agent center Ryan Spooner.

That would make plenty of sense on a couple of sides. First, Lucic is a Vancouver native, so you could understand how it would be an acceptable destination. Second, the Canucks certainly could use some snarl — especially if it’s accompanied with talent — and Lucic does bring that on the nights he shows up to play.

11:05 a.m.: One of the more fascinating names being bandied about continues to be Maple Leafs forward Phil Kessel. Kessel has an eight-team list he’d approve a trade to, which TSN’s Bob McKenzie reported earlier this month. The teams Kessel can be traded to without his approval are: Boston, Chicago, Los Angeles, Minnesota, Montreal, New York Rangers, Philadelphia and Pittsburgh.

Maple Leafs president Brendan Shanahan told The Hockey News “anything is possible” when it comes to Kessel. The Hockey News also speculates a few additional potential suitors for the sharp-shooting winger.

“The Detroit Red Wings are making enquiries, but a better fit might be a team needing to add salary to get to the cap floor, a team such as the Nashville Predators, Florida Panthers or Arizona Coyotes,” Ken Campbell wrote. “The Leafs also have a second-round pick, 24th overall, so there are a lot of moving parts. But Shanahan said there is no self-imposed deadline to make a deal.”

10:42 a.m.: The Buffalo Sabres could be far from done. They’ve already got their goalie in Robin Lehner, and they’re expected to draft Jack Eichel with the No. 2 pick. It also sounds like they could be gearing up for some more big things, according to the Buffalo News’ Mike Harrington.

If the Sabres also are able to add Ryan O’Reilly, this would become an even bigger day for a team looking to restore credibility — and talent.

9:52 a.m.: It appears Robin Lehner is going to Buffalo, and the Senators are getting a pretty good haul in return for the goaltender, per TSN’s Bob McKenzie.

9:21 a.m.: Appears Mike Fisher has a new deal with Nashville.

8:49 a.m.: Carl Soderberg reportedly agreed to sign an extension with the Colorado Avalanche, according to ESPN’s Craig Custance.

8:47 a.m.: Teams looking to add a goalie likely are in touch with the New York Rangers. Backup Cam Talbot remains a hot commodity, and TSN’s Darren Dreger says it’s a matter of time before Talbot is moved.

8:26 a.m.: All indications are it’s going to be a busy day for new Bruins general manager Don Sweeney. We already told you about the reports surrounding Arizona’s No. 3 pick, and additionally, it sounds as if Sweeney is ready to unload some of his core.

Milan Lucic has been a Bruins mainstay for years, but reports are starting to arise that he could be on the move at some point. The Los Angeles Kings even made a bid, according to Friedman.

8:13 a.m.: The Boston Bruins traded Carl Soderberg (and his rights) to the Colorado Avalanche on Thursday night. It sounds like it won’t take long for Soderberg to sign on with the Avs.

As McKenzie points out, it will be interesting to see what happens with Ryan O’Reilly, as you have to wonder if this finally might be the end of an occasionally tumultuous relationship.

Also, Vancouver Canucks defenseman Kevin Bieksa’s name continues to be reported in trade rumors. It sounds like he could be on his way to San Jose, as Sportsnet’s Elliotte Friedman says Bieksa is willing to waive his no-trade clause to join the Sharks.

8 a.m.: It’s draft day in the NHL, but much of the focus could end up on players already in the league.

Draft day always is one of the NHL’s most hectic days, and this year already looks to be no different. Plugged-in hockey fans woke up to see plenty of rumors and speculation swirling, as teams will not only look to draft their next big talent Friday night, they’ll spend much of the day wheeling and dealing with other teams about players already on rosters.

Early on, it sounds as if the Arizona Coyotes are ready to be very active. The Coyotes own the No. 3 draft pick, which means they’ll lose out on Connor McDavid and Jack Eichel in the first two picks. They certainly sound open to moving that pick, as multiple reports have the Coyotes as one of the busiest teams early on.

TSN’s Bob McKenzie reported early Friday that the Coyotes are listening to offers for the pick, even leaning toward trading the selection. The Boston Bruins, according to McKenzie, are one of the teams interested.

What would it cost to acquire that pick? TSN’s Darren Dreger hears there’s also plenty of interest in Bruins defenseman and restricted free agent Dougie Hamilton. Dreger reasons there could be a match between the Bruins and Coyotes.

Also, keep an eye on what the Toronto Maple Leafs do. They have tradeable pieces, including forward Phil Kessel. According to multiple reports, the Pittsburgh Penguins could be a team eyeing the sniper.

Got all of that? Good. Remember to check back through the day for all of the latest news and rumors — and don’t forget to breathe. 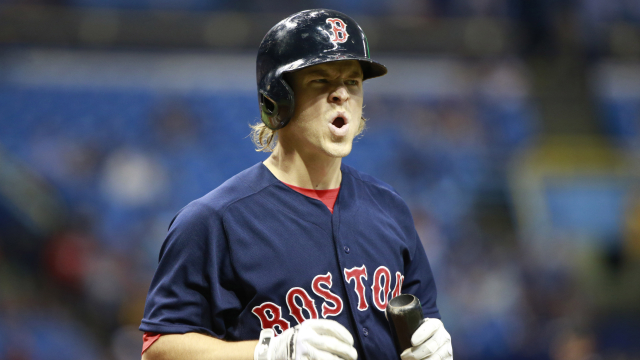