BOSTON — Fenway Park played host Friday night to one of the most unorthodox pitching displays in recent memory.

Pat Venditte, a 29-year-old Oakland Athletics reliever, became the first major league pitcher since 1995 to throw pitches with each arm in the same game.

As a switch-pitcher, Venditte threw right-handed to lefties and left-handed to righties, and during his two innings of work, the Boston Red Sox could hardly touch him. The ambidextrous A’s hurler faced six batters in Oakland’s eventual 4-2 loss, allowing one hit and striking out one in his major league debut.

Red Sox manager John Farrell has seen a switch-pitcher in action before — he was teammates with Greg Harris, the last man to accomplish the feat in the majors — but he was thoroughly impressed nonetheless.

“That was truly amazing tonight,” Farrell said after the game. “To watch Venditte — it’s a remarkable thing to see what one person’s body is capable of doing. The coordination — even guys in our dugout were kind of marveling. This is a very unique thing, and a very cool thing, actually.”

Venditte employed a southpaw delivery against the first batter he faced, left-handed-hitting third baseman Brock Holt, then switched to his right hand for the next four hitters — all righties.

The one moment of confusion arose when catcher Blake Swihart, a switch-hitter, strolled to the plate with two outs in the eighth inning.

Ultimately, Venditte elected to pitch righty against the rookie catcher — and struck him out swinging.

“I faced him a bunch of times (in the minors),” said Mookie Betts, who flied out to right field in the eighth. “I didn’t have very good success.”

Betts isn’t the only Red Sox player who has history with Venditte. Wade Miley, who started Friday’s game for Boston and picked up the win, recalled having faced him in college while Miley was at Southeastern Louisiana and Venditte was at Creighton.

Venditte, a 20th-round draft pick of the New York Yankees in 2008, toiled in the minor leagues for seven-plus seasons before finally breaking through with the A’s. Betts was stunned it had taken Venditte so long.

“I didn’t even know he was 29,” the center fielder said. “But facing him so many times, I would have put him in the big leagues a long time ago.” 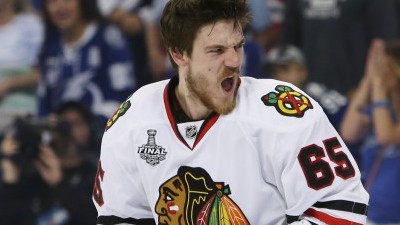