Silver and gold could be in Xander Bogaerts? future.

Bogaerts, known for his bat while coming up through the Boston Red Sox system, always had the look of someone who might earn a few Silver Slugger awards before his career is over. Now, because of some major improvements over the last few months, the 22-year-old shortstop also looks like someone capable of reeling in a Gold Glove or two down the road. His second-year jump has been that dramatic.

?Truthfully, no,? Red Sox infield instructor/third base coach Brian Butterfield recently told The Boston Globe?s Alex Speier when asked whether he?s seen a more considerable step forward than the one Bogaerts has taken defensively from 2014 to 2015. ?There?s still a lot of room for improvement. There?s still a lot of work for us to do. But to answer quickly, no.

Bogaerts? latest reminder of just how much he?s improved over last season came in Friday’s series opener against the Los Angeles Angels at Angel Stadium of Anaheim. Erick Aybar hit a ground ball into the hole with two outs and a runner on third base. Bogaerts ranged over, made a backhanded play and fired a strong, off-balance throw to first base to retire the side and prevent the Angels from taking a lead.

“That?s a play he doesn?t make a year ago,” Red Sox manager John Farrell told reporters after Boston?s 1-0 loss. “That?s an outstanding major league play. The reaction, the confidence, the speed in which he’s playing. He’s just doing an outstanding job on both ends of the baseball.”

Bogaerts is playing with more confidence this season. There were times last season when he looked overwhelmed, both at the plate and in the field. The addition of shortstop Stephen Drew and Bogaerts? temporary shift to third base certainly didn?t help. If anything, it cut into Bogaerts? development.

Fortunately for the Red Sox, Bogaerts? setback didn?t spiral into a long-term issue. He even showed improvement toward the tail end of 2014. But few expected such significant defensive progress so quickly. The defensive metrics even suggest Bogaerts should at least be in the Gold Glove discussion.

All of the following are numbers entering Sunday.

Qualified American League shortstops by FanGraphs? Error Runs (ErrR), which measures the number of runs above or below average a fielder is, determined by the number of errors he makes as compared to an average fielder at that position given the same distribution of balls in play
1. Xander Bogaerts, Boston Red Sox: 5.2
2. J.J. Hardy, Baltimore Orioles: 4.3
3. Asdrubal Cabrera, Tampa Bay Rays: 3.6
4. Alexei Ramirez, Chicago White Sox: 2.3
5. Jose Iglesias, Detroit Tigers, 2.0

A lot obviously goes into playing shortstop, and Bogaerts has improved in several areas. His throws have been more accurate, his range has increased, his first-step quickness has been more explosive and greater anticipation has led to better decision-making. Bogaerts looks more comfortable and more prepared in Year 2, which is a testament to his hard work over the offseason. He truly wants to succeed.

?I think it?s very important to Xander to be a front-line shortstop, a championship-caliber shortstop,? Butterfield told Speier. ?We?re seeing a lot of effort and work from him to get better offensively and defensively, and I think we?ll see that for the rest of his career.?

Bogaerts? future is bright, no matter which lens you look through. He’s hardly a one-trick pony, especially given this season’s official coming-out party. 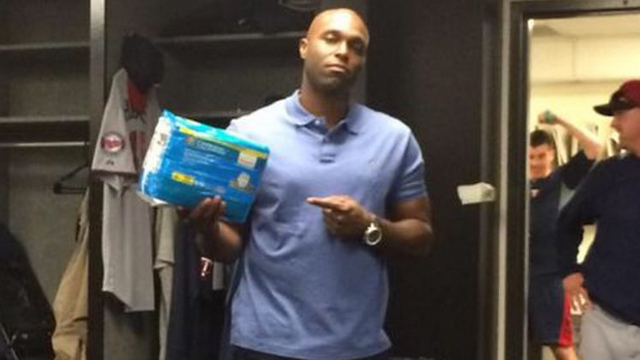