ESPN’s Chris Mortensen appeared on ESPN Radio’s “The Dan Le Batard Show” on Monday to explain the misreporting that many feel incited the wild goose chase that Deflategate has become.

Mortensen cited sources days after the AFC Championship Game to report that 11 of the 12 footballs used by the New England Patriots were underinflated by two pounds per square inch each. The Wells Report later disproved this data.

Mortensen was scheduled to appear on WEEI last week, but canceled the interview. Mortensen talked about his sources, the reporting process and offered a few thoughts on the whole saga.

There’s a lot of information in the full transcript below, as transcribed by MassLive, but here are the three biggest takeaways:

— Mortensen admitted that while he could have a “better job vetting” the story, he doesn’t think misreporting that 11 footballs were underinflated by two pounds per square inch was a big issue. If he just reported the balls were “severely underinflated,” another term he used repeatedly in his reporting, it would have caused just as big an uproar.

— He thinks the entire Wells Report is a joke and that Tom Brady doesn’t deserve a suspension.

“I was also on the record as saying there never should have been an independent investigation. There should have been a review, get it to the competition committee, slap people on the wrist and move on. But that’s not what the league chose to do.”

— He says he’s spoken with Patriots owner Robert Kraft and that Kraft isn’t upset with Mortensen, but with the NFL.

“And to be honest with you, Robert Kraft and I have had a conversation since then. It’s going to remain confidential. But it’s basic gist is: My fight, our fight, is not with you. It’s with the NFL. We have no beef with you. We have a beef with the NFL.”

Mortensen goes into more detail about why he canceled on WEEI, how he feels he never implicated the Patriots, and what he’s most frustrated about with this entire situation. It’s worth a read.

Dan Le Batard: “Unpleasant, right? The last few months being in the middle of all this?”

Chris Mortensen: “Yeah, because as you know, in terms of strictly reporting, the reporter is never supposed to be part of the story and evolve into semi-centerpiece of the story, although I really don’t believe I am. It’s kind of evolved that way because of the war between the Patriots and the NFL. So, it’s a very awkward position to be in. But they always say ‘big boy football,’ (so) ‘big boy journalism’ and that’s what I do for a living.”

Le Batard: “You’ve got people in Boston speculating who your source is or was. What do you do with that speculation?”

Mortensen: “You cannot touch it. The reason why you create trust with sources is you don’t even go there. And it could be very unfair to the person identified by somebody as a source. And by the way, we have sources. It’s not a single source at the time. What you do is you have to keep your distance. That’s how you keep your credibility with your sources anyway — just to maintain that level of trust. You’re never going to bend in terms of identifying them. Somebody could be taking a wild guess, which I think they are here. And I go back, really what we’re talking about, is a three or four day period of reporting. The game itself was on a Sunday, right? Unbeknownst to me, those footballs were taken at halftime and measured because of a complaint that took place in the first half. Bob Kravitz of the Indianapolis media reported that there’s an investigation into under inflated footballs and there’s silence for about two days, and I’m getting ready to go to Arizona for the Pro Bowl and Super Bowl, which we happen to have on ESPN, and all I can tell you is my inquiry was focused just like this with somebody on the night I was looking forward to leaving the next morning to get out of the winter and into the sun. (The inquiry) was, ‘How many footballs are we talking about here? Three or four?’ And what came back to me was 11. And that was a significant number. That was my focus. Because quite frankly, I didn’t even know what the PSI regulations were at that time, but when I heard 11 footballs were under inflated, then I got on the phone and talked to three different people and one of them said … 11 footballs was consistently verified, as it was in the Wells Report, by the way. The PSI level, one of my sources said ‘two pounds under.’ And another said ‘significantly under inflated.’ I used both those terms. Two pounds under and significantly under inflated. Who those sources are will forever remain in my confidence.”

Mortensen: “What needs to be corrected has been corrected. I didn’t correct it on Twitter, which was a mistake by the way. Twitter, I’m still trying to figure it out. The bottom line is, as the Wells Report showed, there were not 11 balls that were all two PSI under the 12.5 minimum requirement. Now let me say this: And I’ve done this before. I can understand after reading the Wells Report, because we had silence for three months, that could somebody generalize two pounds under based on the range of 12.5 to 13.5? Yeah, they could have. Now that’s my job to do a better vetting job as a journalist. But let me ask you this question: If I had simply reported, which I did include in the original report, that 11 footballs were found to be significantly under inflated, what would the reaction have been? The same, I think. Which is the descriptive narrative that I actually did change it to and correct it. What I didn’t do is I didn’t write a formal, something on Twitter to say, ‘OK we’re getting conflicting information. Leave it at significantly under inflated.’ And then Roger Goodell’s appealed decision, if you read it, the 20-page decision in which he upheld the suspension of Brady, you get the idea that they are going with the gauge that said he had five balls in the 10 range and four in the lower 11 range and another couple maybe in the middle 11 range. And oh by the way, in my original reporting, (I) never implicated Tom Brady. Never implicated the Patriots. I did ask the question if Walt Anderson, the referee, followed the protocol and the league assured me he had. But the first person who really mentioned Tom Brady in this whole matter happened to be Bill Belichick in that Thursday press conference: ‘If you want to ask about the footballs, ask Tom.'”

Le Batard: “Do you feel betrayed by your source or sources, Mort?”

Mortensen: “Listen, one of the sources I did not feel betrayed by I think I’ve got a pretty good understanding of what happened. I feel like I probably could have done a better job of vetting, but I didn’t have access to that person for that long a period, but I did on a couple of others. For me, it’s a matter of, ‘When you say two pounds under, what are you talking about? Are you generalizing a range of two pounds under?’ And oh by the way, in the NFL letter of notification to the Patriots, when they notify them ‘Hey we’re looking into this,’ Dave Gardi, who is part of the football operations for the NFL, said one ball was as low as 10.1 PSI. Turns out there was no ball 10.1 PSI. And so therefore, I think there was some inaccurate data at the time that was passed on to me, but I also talked to other sources who verified the number that I was focused on. The number of footballs. Eleven was a significant number, and ‘significantly underinflated’ was a significant description. And so therefore do I feel betrayed? No. And by the way, this whole concept of being deliberately lied to, that means somebody called me up. When anybody calls me up and volunteers significant information, I always get suspicious of motive. That’s a red flag right there. As I said you go through that process and you review your own work. And I’ve done that. And I’ve actually talked about it on more than one occasion, but for some reason people think that I’ve just gone into a cave. If I go quiet after the NFL Draft, I go quiet. That’s usually what I do.”

Le Batard: “Mort, why did you cancel on WEEI?”

Mortensen: “Well first of all I’ve done WEEI before. Did something with Christian Fauria before the Super Bowl talking about this issue. And the other thing is the day before, listen they text me and said ‘Do you have time — 7:45 in the morning?’ I happen to be doing a lot of ESPN work, working on Russell Wilson contracts, a lot of things. And I wasn’t on the internet reading and somebody said, ‘Hey there’s a story out there that you’re going to talk about this for the first time,’ which was not true, by the way. I wasn’t talking about it for the first time. And Adam Schefter, my partner at ESPN, one of my partners in journalism there, had been ambushed a little bit. And I said, ‘you know what? I’ve got enough to work on tomorrow.’ And all I did was text the night before and said ‘Look, you made a mistake. You’ve drummed up business as if this is the first time I’ve talked about this, which it isn’t. And I said I’m not going to let you or Mr. Kraft or anybody do any more misreporting about this thing, so don’t call.’ And to be honest with you, Robert Kraft and I have had a conversation since then. It’s going to remain confidential. But it’s basic gist is: My fight, our fight, is not with you. It’s with the NFL. We have no beef with you. We have a beef with the NFL.”

Le Batard: “There’s a perception out there that perhaps you were used by the NFL to launch a smear campaign on either the Patriots or Brady. Is that a fair perception?”

Mortensen: “No, not at all. Nobody from the NFL ever identified Brady as being the target of an investigation in that first week we’re talking about, within three days of the game. Brady’s never mentioned. The Patriots are never mentioned. And the Wells investigation was not launched because of my reporting. There’s no evidence of that. I’ve checked on that. So therefore it’s hard to feel I was used. And Ted Wells himself in a conference call said, ‘It’s ludicrous to think that the league would want to smear its face of the league in Tom Brady with this type of campaign.’ To me, it’s an insult a little bit to the intelligence. But I do know the Patriots believe that, by the way. That is their belief, and therefore obviously their fanbase believes that, too…

“Sometimes, as time passes on, the narrative — that’s the popular word — that everything changes where people think, like I say, I never even identified Brady. I never had NFL sources say Brady was the target.”

Le Batard: Is there a need to retract the original story?

Mortensen: “I already had changed the descriptive tone. And I did with our news desk, pretty early, to ‘significantly underinflated.’ And I will never retract that. The two pounds PSI, that was obviously an error and clarified and corrected. If you want to call it a retraction…what I didn’t do was retract it on Twitter. And that was probably technically a mistake.”

Le Batard: “I want to know a person you are angriest at right now … within this story.” 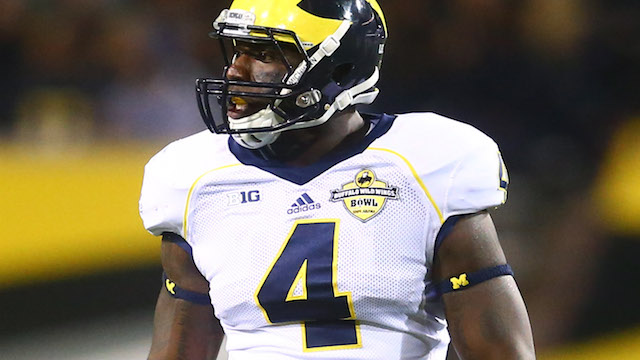