Here’s a newsflash: The first few rounds of your fantasy football draft are really important.

It sounds obvious, but it’s worth stating: The beginning of the draft is where you build the foundation for your team, so it’s important you select players who are sure bets to perform.

Of course, there are plenty of ways to accomplish said goal. Some swear by drafting a running back in the first round, while others believe landing an elite quarterback can give you a significant leg up. There’s no wrong answer, but a handful of players would give us pause before being taken in the first round.

These players aren’t bums by any stretch of the imagination, but it pays to be picky in Round 1. So before you hit the big red button on that first pick, check out this list of first-round reaches below.

LeSean McCoy, RB, Buffalo Bills (Bye Week: 8)
McCoy has been a perennial first-round pick for several years now, but it’s time to hop off the Shady Train. His numbers dipped significantly last season, and don’t expect 300 more carries for McCoy in a deep Buffalo backfield. He’s still a top-15 running back, but you can do better in the first round.

Peyton Manning, QB, Denver Broncos (Bye Week: 7)
Manning was a first-rounder in tons of leagues last year, and he repaid owners by falling off down the stretch when owners needed him most. The 39-year-old still is good enough to be in that second tier of elite quarterbacks, but this year, that doesn’t translate into a first-round pick.

Drew Brees, QB, New Orleans Saints (Bye Week: 11)
You could make a case that no QBs should be taken in the first round in standard-scoring leagues. But if there’s an exception to that rule, it has to be Andrew Luck or Aaron Rodgers. Brees’ touchdown numbers have dipped in each of the last four seasons, and he lost his best weapon in Jimmy Graham during the offseason.

Odell Beckham Jr., WR, New York Giants (Bye Week: 11)
Is Beckham is a stud? Yes. But given the talent at running back this season, we’d argue there’s only room for one or two wide receivers in the first 10 picks. Antonio Brown looks like the best wideout in fantasy football, and we’d feel better taking a veteran like Dez Bryant or Demaryius Thomas over the 22-year-old Beckham.

Rob Gronkowski, TE, New England Patriots (Bye Week: 4)
The gulf between Gronk and the next-best tight end is huge, and that makes him very valuable. That said, we just can’t justify taking a tight end in the first round, especially if that tight end could be without his starting quarterback for the first four games of the season. Resist the urge and take Gronk in Round 2.

Matt Forte, RB, Chicago Bears (Bye Week: 7)
Another guy who usually has been a first-round pick, Forte is getting up there in age (he’ll turn 30 in December) and will have to adjust to a new offensive system this season. He’s been as reliable as they come, but there are too many running backs ahead of him to justify using a first-round pick.

Calvin Johnson, WR, Detroit Lions (Bye Week: 9)
Is Megatron actually human? Five missed games over the last two seasons proves that answer could be yes, and while we wouldn’t be surprised at all if Johnson bounces back with a monster season, his slight injury concerns are enough to bump him out of that top tier of pass-catchers.

A.J. Green, WR, Cincinnati Bengals (Bye Week: 7)
Like Johnson, Green consistently ranks among the NFL’s best receivers every year. He did miss three games due to injury last season, though, and his touchdown production dropped from 11 in 2013 to six in 2014. He’s definitely worthy of a second- or third-round pick, but there are better options for Round 1.

Jeremy Hill, RB, Bengals (Bye Week: 7)
Hill’s strong finish to his rookie campaign helped him take over the featured back role in Cincy. Hill’s still just 22, though, and 2013 second-round pick Giovani Bernard figures to be hot on his heels if he slips up at all. Your first-rounder should be slam dunk, and we think Hill’s more of a layup. 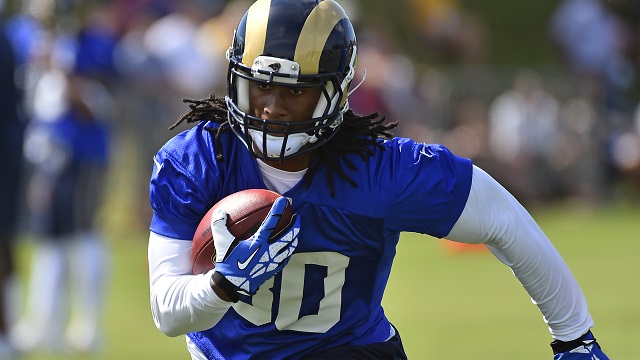 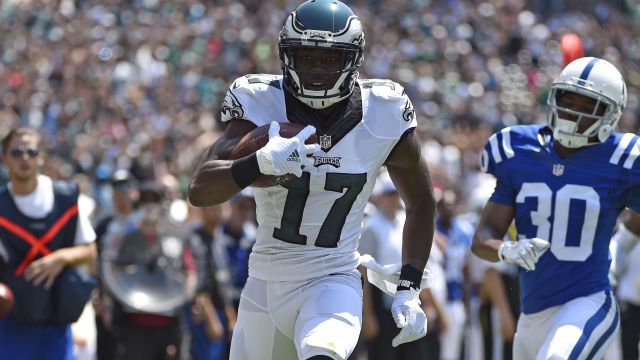