It’s mightily important to take a top-tier running back early in your fantasy league’s draft because there aren’t too many of them.

There are plenty of elite wide receivers, but once you miss on a top-10 running back, the quality at the position drops off significantly.

1. Adrian Peterson, Minnesota Vikings (Bye Week: 5)
2014 stats: 21 carries, 75 yards, 0 TDs
Peterson played in only one game last season due to suspension. He’s been one of the NFL’s best running backs since entering the league in 2007, and the former league MVP should be a Tier 1 RB throughout the 2015 campaign. Peterson has never tallied less than 10 rushing touchdowns in a full season.

2. Eddie Lacy, Green Bay Packers (Bye Week: 7)
2014 stats: 246 carries, 1,138 yards, 9 TDs
Lacy is an elite running back in a very powerful offense that features arguably the league’s best quarterback in Aaron Rodgers. His size makes him a goal-line threat as well, and he’s a near-lock for 10 touchdowns.

3. Jamaal Charles, Kansas City Chiefs (Bye Week: 9)
2014 stats: 206 carries, 1,033 yards, 9 TDs
Charles was healthy for the third straight year in 2014, but his total yards from scrimmage decreased by about 600. However, he’s still a dual-threat on offense and should rack up at least 10 total touchdowns.

4. Le’Veon Bell, Pittsburgh Steelers (Bye Week: 11)
2014 stats: 290 carries, 1,361 yards, 8 TDs
Bell enjoyed a breakout 2014 season and ranked second in the league in rush yards. He also had 854 receiving yards and three touchdowns, and he should remain a constant target in a prolific Steelers passing attack led by quarterback Ben Roethlisberger. It should be noted that Bell has been suspended for the first two games of the regular season.

5. Marshawn Lynch, Seattle Seahawks (Bye Week: 9)
2014 stats: 280 carries, 1,306 yards, 13 TDs
Lynch is a power back who racks up tons of yards after contact and owns the goal line. His 13 rushing touchdowns tied DeMarco Murray for the league lead and he ranked fourth in rush yards. Lynch should have another excellent season in a well-balanced Seattle offense that added star tight end Jimmy Graham.

6. DeMarco Murray, Philadelphia Eagles (Bye Week: 8)
2014 stats: 392 carries, 1,845 yards, 13 TDs
Murray led the league in rushing yards and touchdowns last season, while also showing the durability fantasy owners expect from a No. 1 running back. He’s entering his first season with the Eagles, and it should be a good move for him given the offensive brilliance of head coach Chip Kelly.

7. C.J. Anderson, Denver Broncos (Bye Week: 7)
2014 stats: 179 carries, 849 yards, 8 TDs
Anderson emerged as Denver’s No. 1 running back in the middle of the season and became a threat in the rushing and passing attacks with over 1,000 total yards. He’s expected to remain as the starter heading to the 2015 campaign, and any No. 1 running back in a Peyton Manning-led offense is worth owning.

8. Justin Forsett, Baltimore Ravens (Bye Week: 9)
2014 stats: 235 carries, 1,236 yards, 8 TDs
To the surprise of many, Forsett was a top-five fantasy running back last season, and he also showed the ability to make big plays with a league-leading 17 runs of 20-plus yards. There’s no reason to believe Forsett will fail to have another productive season as the Ravens’ No. 1 back.

9. LeSean McCoy, Buffalo Bills (Bye Week: 8)
2014 stats: 312 carries, 1,319 yards, 5 TDs
McCoy ranked third in the league in rush yards, but his touchdown output was not at the level expected. He also wasn’t much of a factor in the passing game, with just 155 yards and zero receiving touchdowns in 16 games. McCoy is entering his first full season with the Bills and will be the focal point of the offense.

10. Matt Forte, Chicago Bears (Bye Week: 7)
2014 stats: 236 carries, 1,038 yards, 6 TDs
Forte ran for more than 1,000 yards for the third straight season, but his real impact came in the passing game. He set career highs with 102 receptions, 808 receiving yards and four touchdown catches. Expect the Bears’ No. 1 running back to have another well-rounded campaign.

12. Mark Ingram, New Orleans Saints (Bye Week: 11)
2014 stats: 226 carries, 964 yards, 9 TDs
Ingram emerged as the most effective player in a crowded Saints backfield last season. He’s likely to get the bulk of the carries again in 2015, and his superior size and strength always makes him a candidate to receive goal-line touches.

14. Lamar Miller, Miami Dolpins (Bye Week: 5)
2014 stats: 216 carries, 1,099 yards, 8 TDs
Miller showed remarkable improvement last season and has improved his rushing yards and touchdown totals in each of the last two years. Will 2015 be his breakout campaign? It’s worth a gamble with a second- or third-round pick.

15. Frank Gore, Indianapolis Colts (Bye Week: 10)
2014 stats: 255 carries, 1,106 yards, 4 TDs
Fantasy owners are waiting for Gore to finally hit a wall and not be a productive RB, but he still went over 1,000 yards for the fourth straight year despite being 31 years old. His touchdown total decreased from nine to five, but he’s still a pretty good option as an RB2 in most leagues.

16. Carlos Hyde, San Francisco 49ers (Bye Week: 10)
2014 stats: 83 carries, 333 yards, 4 TDs
Gore’s departure has made Hyde the No. 1 running back in San Francisco, and the 2015 season will be a prove-it-to-me campaign for fantasy owners. Hyde has the potential to be a very effective RB, but he didn’t do much to take the starting job last season when Gore — and the 49ers offense as a whole — was struggling.

17. Arian Foster, Houston Texans (Bye Week: 9)
2014 stats: 260 carries, 1,246 yards, 8 TDs
The injury bug has bitten Foster once again, as he’ll miss at least the beginning of the season with a groin injury. When he’s healthy, though, Foster still is a No. 1 fantasy running back. He’s rushed for 1,000-plus yards and at least eight touchdowns in four of the last five seasons and also set a career high with five touchdown receptions last year.

18. Andre Ellington, Arizona Cardinals (Bye Week: 9)
2014 stats: 201 carries, 660 yards, 3 TDs
Ellington didn’t have the breakout 2014 season that many experts predicted, but he did receive the majority of the carries and heads into the 2015 campaign as Arizona’s No. 1 running back. He must improve his touchdown production to be a dependable RB2 for fantasy owners.

19. Jonathan Stewart, Carolina Panthers (Bye Week: 5)
2014 stats: 175 carries, 805 yards, 3 TDs
Stewart finally is the No. 1 back in Carolina following DeAngelo Williams’ departure to Pittsburgh. The 8-year veteran should be able to crack the 1,000-yard mark and is likely to see his touchdown total rise with increased carries. Don’t expect him to be a factor in the passing game, though.

20. Melvin Gordon, San Diego Chargers (Bye Week: 10)
2014 stats (at Wisconsin): 343 carries, 2,587 yards, 29 TDs
Gordon is among the best rookie running backs for fantasy owners to target because he’s in a talented Chargers offense and should be the starter in Week 1. He’s a strong, agile back who is capable of excelling in goal-line situations and third down. Gordon is ready for a heavy workload after a historic final season at Wisconsin. 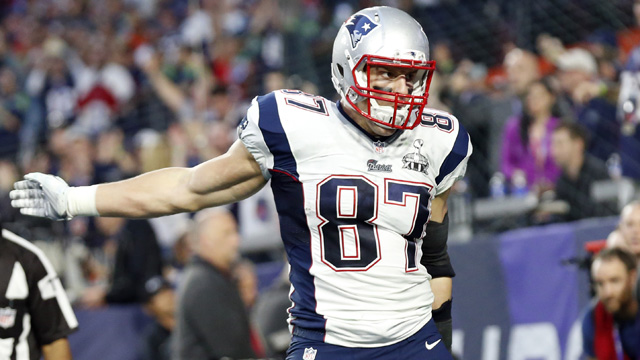