The New York Jets continue to find ways to out-Jets themselves.

Jets head coach Todd Bowles announced Tuesday that quarterback Geno Smith will miss six to 10 weeks with a broken jaw. According to Bowles, Smith suffered the injury during a locker room fight with linebacker IK Enemkpali.

Bowles said Enemkpali has been released, and according to CBS Sports’ Jason La Canfora, a punch from Enemkpali can do some damage — as Smith obviously found out.

Smith is followed by Ryan Fitzpatrick on the Jets’ depth chart. The Jets acquired Fitzpatrick from the Houston Texans in March in exchange for a conditional draft pick. That conditional pick was a seventh-round pick that reportedly become a sixth-rounder based on playing time.

Of course, there will be plenty of people who say this actually works in the Jets’ benefit. Smith has been widely considered a failure through his first two seasons after the Jets drafted him in the second round in the 2013 NFL Draft. Smith appeared in 14 games last season — with a 3-10 record as a starter — completing 59.7 percent of his passes. For his career, Smith has 34 interceptions to 25 touchdowns and a passer rating of just 71.5.

Jets wide receiver Brandon Marshall — no stranger to quarterback issues himself — tweeted this shortly after the news (and Smith’s jaw) broke.

Smith himself went to social media, promising followers on Instagram, “ILL BE BACK.” 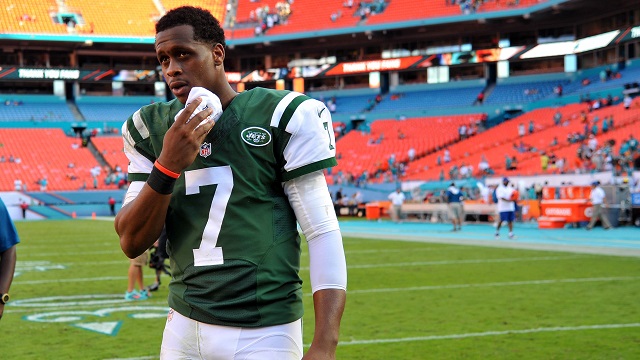