Liverpool can take both positives and negatives from Monday’s goal-less draw with Arsenal. Such is the nature of any stalemate.

The Reds rose to the occasion in their first outing against one of the Premier League’s big guns in 2015-16, outplaying the Gunners on the road for 45 minutes before ceding control of the contest in the second period in a quintessential game of two halves.

Liverpool is celebrating the hard-earned result but it also must rue the many chances it had to win the game. Only Arsenal goalkeeper Petr Cech’s litany of saves and his trusted posts kept the Reds off the board. Christian Benteke and Philippe Coutinho probably still are wondering how none of their shots beat Cech. The number of chances Liverpool created is a positive step. That they didn’t finish any of them — against Arsenal’s makeshift back line — is a cause for concern.

Defending has been the brightest aspect of Liverpool’s play this season, and that remained the case against Arsenal. Brendan Rodgers set up his Liverpool team superbly, nullifying Arsenal’s goal threat and causing havoc at the Gunners’ back with their pressing game. That the referees disallowed Aaron Ramsey’s eighth-minute goal shouldn’t diminish how well the Reds defended in the first period, but their concession of the initiative should.

The intensity of Liverpool’s defensive pressure eased after 60 minutes, allowing Arsenal to dominate play in the second half and create a host of scoring chances. Liverpool goalkeeper Simon Mignolet was Cech’s equal on the day, preventing Arsenal from snatching the victory in the second half. Mignolet’s brilliance was good, as was the fortitude Liverpool showed to hang on until the final whistle. That Liverpool failed to stem Arsenal’s tide through either Rodgers’ changes or on-field leadership is a blemish.

The draw ultimately stands as a positive result, especially in light of Liverpool’s last visit to the Emirates Stadium. Arsenal effectively ended Liverpool’s top-four charge last season by inflicting a heavy defeat on the Reds. Rodgers’ Liverpool returned to North London with renewed confidence and fighting spirit that should serve it well throughout 2015-16.

Liverpool is in good position as it pushes forward into the most brutal stretch of road games any team will face this season. Our napkin math says Liverpool can enter the winter with genuine title or top-four aspirations if it earns 10 or more points from those first seven road games (the Reds also must make Anfield both a fortress and a sanctuary between now and December). Liverpool already has banked four points on the road. Six would have been better.

Liverpool isn’t lighting up the goal ledger, having scored twice in its first three games. Liverpool isn’t giving away goals either, as three consecutive shutouts to start the season prove.

The Reds’ season won’t always be pretty, but it has been good so far.

#LFC are yet to concede a goal in the #BPL this season… #ARSLIV pic.twitter.com/6HZ9oEtDxJ 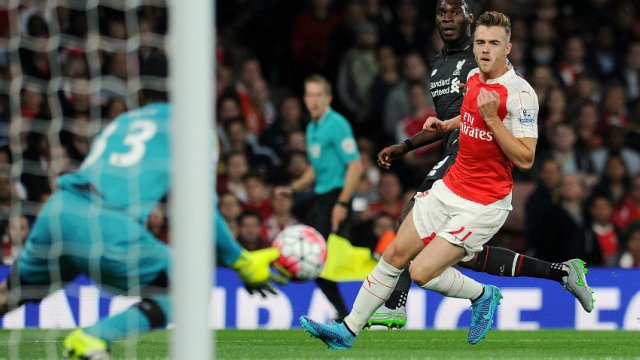