The Boston Red Sox sat this one out.

The Red Sox usually are considered major players at the Major League Baseball non-waiver trade deadline. Even when they don’t make a huge splash, they’re typically at the heart of several rumors, with trades of varying importance seeming like legitimate possibilities leading up to July 31.

This season was different. There wasn’t a whole lot of buzz surrounding the last-place Red Sox, and the team’s only move involved acquiring right-handed reliever Ryan Cook.

Red Sox general manager Ben Cherington still did his homework, though. The Red Sox figure to be active this offseason, which isn’t lost on the franchise’s fan base. This week’s batch of mailbag questions focused on 2016, with an emphasis placed on Boston’s pitching situation.

Let’s jump into the action.

Will the Red Sox make any moves for starting pitching over the offseason?
— Danny Kinsella

Yes. There?s no way the Red Sox could justify not doing so, especially since Cherington identified pitching and defense as two areas where the club needs to improve.

Boston?s vision last offseason was clear: build an offense potent enough to mask potential pitching deficiencies, the biggest of which was the absence of an ace. It backfired. The Red Sox?s offense has been good at times, but it hasn?t been powerful enough to overcome the team?s other shortcomings.

It?ll be back to the drawing board this offseason and the worst thing the Red Sox could do is be stuck in their ways. Their vision last offseason wasn?t illogical. While the Sox whiffed on not re-signing Jon Lester, their decision to acquire pitchers for their prime years and gamble on potential rather than past performance seemed like a good way to fend off the rising costs of starting pitching, especially for a team believed to be chock full of offensive firepower. But the Red Sox learned there?s just as much risk involved in relying on a (previously) good, but not great, pitcher, like Rick Porcello, to take the next step.

The Red Sox need someone with a proven track record to lead the rotation. Maybe two. It?ll allow whoever else remains part of the mix to slot in with the appropriate expectations. Porcello can be a middle- to back-of-the-rotation starter, Wade Miley can be a respectable No. 5, Clay Buchholz can be a guy relied on for excellent peak performance with the understanding he?s not going to make every start and whichever pitching prospect(s) stays can transition into the majors without being viewed as a savior.

It?s up to the Red Sox to identify the one or two front-line starters that fit best. It?s also on Cherington and Co. to figure out how to obtain those pitchers, whether they?re trade targets or free agents. But the overriding point is undeniable: The Red Sox need starting pitching. And they?ll acquire starting pitching.

… which brings us to our next question.

Admittedly, Jason, your question is difficult to answer because we don?t know which pitchers will be available in trades this winter and we don?t know how much free-agent starters will be seeking on the open market. We certainly can make assumptions and rely on what?s been reported to this point, but things change, obviously, and only those at the bargaining table know the real answers.

Enough with that spiel, though. I know what you?re getting at. The most important thing is landing the right guy(s) this offseason. And some pitchers should tickle the Red Sox?s fancy more than others.

Chris Sale?s the dream target. We could run down his credentials for hours, but that seems like a waste of time. He?s one of the best pitchers in baseball and everyone knows it. That includes the Chicago White Sox, who probably aren?t inclined to trade the 26-year-old ace, especially since his contract is incredibly team-friendly.

Sonny Gray?s a close second for many of the same reasons: He?s awesome, he?s young (turns 26 in November) and he?s under team control for a while. Like Sale, he probably isn?t going anywhere unless his team is completely blown away by an offer. But if you want to argue the Red Sox should be the ones to wow Oakland Athletics general manager Billy Beane, I won?t fight you on it.

Among realistic trade targets (based on what we know), Carlos Carrasco of the Cleveland Indians is the best option. Tyson Ross of the San Diego Padres is the second-best.

Carrasco, who will be 29 come Opening Day 2016, is controllable through 2020 (signed through 2018 with club options for 2019 and 2020). There?s risk — he?s a late bloomer who first found his stride in 2014 — but his upside is substantial. For a team lacking power arms, his strikeout rate (9.9 per nine innings; seventh among MLB starters) is appealing. He also doesn?t walk many, which is a plus.

Ross, who turns 29 next April, is controllable through the 2017 season. His walk rate (4.30 per nine innings; worst among MLB starters) has been an issue this season, but his strikeout rate (9.66 per nine innings) is almost as prolific as Carrasco?s and his sample of success is a bit more sizable. The right-hander also induces ground balls at an impressive rate and he simply doesn?t surrender home runs, though it?s worth noting on the latter that he pitches his home games at spacious PetCo Park.

On the free-agent front, without knowing one pitcher?s exact cost in terms of both years and dollars relative to another?s, it?s really a toss-up between Price and Cueto. You can?t go wrong either way. Greinke (assuming he opts out of his contract with the Los Angeles Dodgers) has been dominant this season, but he turns 32 in October, whereas Price and Cueto each will open next season at age 30.

Price has a slight edge over Cueto based on his past success in the American League and his better strikeout-to-walk ratio over the last two seasons (6.10 to 3.84 entering Monday). Plus, there?s an intangible aspect to Price that, while hard to explain and perhaps polarizing, could give Boston?s rotation some much-needed attitude, assuming the sides reconcile any differences stemming from their past history. I also have more trust in Price?s ability to stay healthy.

Boston?s decision could hinge on what happens the rest of this season and, in turn, what else the club does over the offseason. Adding Price (a left-hander) to a rotation already featuring Miley, Eduardo Rodriguez, Brian Johnson and Henry Owens (four lefties) obviously wouldn?t make much sense.

Overall, Boston must decide whether it?s best suited landing its next ace — a term I hate but will use arbitrarily — in free agency or via the trade market. The Red Sox almost certainly will consider both options, especially given the names slated to hit free agency, and perhaps they should tap into both.

It?s time to think big and the Red Sox are well-positioned to pursue top-flight talent.

Have the Red Sox explored turning Joe Kelly into a seventh- or eighth-inning reliever, or maybe even a future closer? There only are so many starts you can give an MLB pitcher before trying him in the bullpen. He’s too good to let fail in the rotation.
— Vincent Stone

The Red Sox should have converted Kelly immediately after optioning him to Triple-A Pawtucket earlier this season. Now, with Owens debuting Tuesday and Johnson likely to receive another major league opportunity soon enough, there?s no reason to keep trotting out an ineffective Kelly.

Is there more value in having an impact starter? Yes, absolutely. But Kelly?s done little to show he?s capable of evolving into such. It?s time to try to harness his talent in the bullpen, especially since he has experience there and his pitch mix is conducive to such a role.

It?s not like the Red Sox would be robbing Peter to pay Paul. They have holes in both the rotation and the bullpen. If the final two months are about making assessments, the Red Sox should assess whether Kelly could be a viable late-inning option for 2016 while leaving rotation spots to Owens and Johnson.

Will they? Probably, though nothing is etched in stone.

Where do the Red Sox go from here with Hanley Ramirez? Would a move to third base or first base work?
— John Gromkoski Jr.

First base seems like a logical destination for Ramirez. He?s been shaky in left field, Mike Napoli?s set to hit free agency and Ramirez has enough pop to stick at the position. In many ways, Ramirez’s build and offensive makeup is synonymous with first base, and the Red Sox don?t have a clear alternative.

Boston should at least explore other, external options first. While playing first base often is regarded as one of, if not the, easiest position to play on the diamond, there are certain responsibilities Ramirez would need to learn and embrace before filling the role. That?s a somewhat scary proposition. 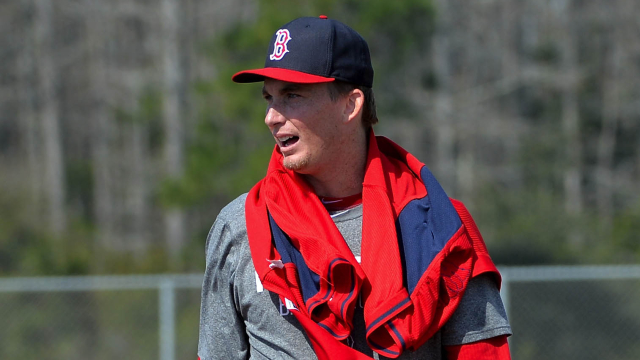