Reggie Wayne On Signing With Patriots: 'I Want To Win, Point Blank' - NESN.com Skip to content

FOXBORO, Mass. — Reggie Wayne received a lot of “serious” calls while he sat at home as a free agent, but he made sure to pick up his phone when the 508 area code came up on his screen.

Wayne signed a one-year contract reportedly worth up to $3 million with the New England Patriots on Tuesday. His reason for picking the Patriots over other “good teams” was simple.

Wayne, who will wear No. 15 with the Patriots since his usual No. 87 is taken by tight end Rob Gronkowski, is working overtime to learn New England’s complex offensive playbook.

“I’m excited about the transition. I’ve got so much work ahead of me,” Wayne said. “I’m sitting at my locker now cramming. It’s been some years since I’ve had to cram. This is something new for me, and I’m looking forward to the journey.”

Unfortunately for Wayne, there aren’t many similarities between the Patriots’ offense and what he was used to with the Indianapolis Colts.

Wayne spent his first 14 seasons in the NFL with the Colts playing under four offensive coordinators: Tom Moore, Clyde Christensen, Bruce Arians and Pep Hamilton. Wide receiver Austin Collie, who played with the Colts from 2009 to 2012, quickly picked up the Patriots’ system in 2013, so there’s hope Wayne won’t struggle with New England’s playbook as veteran receivers did in past years. 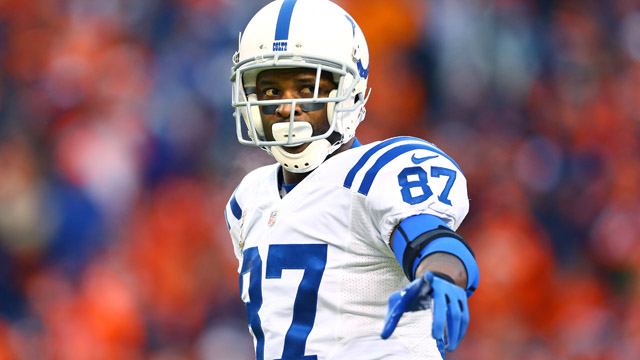 Ex-Chargers Doctor: Reggie Wayne Could Have ‘Big Season’ With Patriots