12:46 p.m.: In context or out of context, regardless, this is a hilarious statement from Jeffrey Kessler.

12:40 p.m.: This is pretty much the crux of the argument for Brady’s team, the NFLPA and Patriots supporters.

12:31 p.m.: It sounds as if Kessler is going after the NFL — despite pleas from Judge Berman not to.

12:05 p.m.: It’s likely obvious by now, but if you’re on Twitter and you aren’t following Stephen Brown, you should be.

11:59 a.m.: This is something Patriots fans have been calling for for a long time.

11:57 a.m.: Berman is going over details of the case with lawyers, currently speaking to the NFL side.

11:56 a.m.: According to The Associated Press — via the Boston Herald — Judge Berman spoke in court before allowing lawyers to make brief arguments.

11:48 a.m.: It sounds like things are wrapping up in the courthouse, and here’s the latest, per ESPN’s Sal Paolantonio. According to Paolantonio, this is what Judge Berman told the sides.

“I have not made up my mind which side will prevail,” Berman said, per Paolantonio’s report on “SportsCenter.”  “We are proceeding on both tracks right now — litigation and negotiation.”

Additionally, no discussions were held publicly in the courtroom.

11:45 a.m.: Here are a couple of interesting tidbits from ESPN and Sports Illustrated contributor Andrew Brandt.

The Pro Football Hall of Famer supports Brady’s decision to hold his ground, and if Brady is innocent, Ditka believes he should continue to do so.

?If you?re innocent ? and I believe Tom Brady is innocent; he doesn?t have to deflate a football to win a football game ? then you don?t (settle),” Ditka said Wednesday on “SportsCenter.”

Check out the video here.

11:10 a.m.: Lost in all of this hoopla is the Patriots open their preseason schedule Thursday night against the Green Bay Packers. When they do, it sounds as if Brady won’t be taking snaps. Obviously, the sides are inside and meeting at the moment. The media is allowed in, but it would appear there’s no tweeting allowed, so reporting currently is at a standstill. We’ll have that news as soon as it breaks.

10:45 a.m.: This basically is an explanation of the day’s goals in 140 characters or fewer, per ESPN’s Dan Granziano.

10:37 a.m.: ESPN’s Hannah Storm just said on “SportsCenter” that Goodell not only arrived to a chorus of boos but also was called a “liar” by fans in front of the courthouse.

10:30 a.m.: Here are some folks wearing deflated football hats for some reason.

10:29 a.m.: Here’s a really, really good point from Yahoo! columnist Dan Wetzel, who’s been one of the NFL’s biggest critics all along.

10:20 a.m.: Brady and Goodell are both in the house, according to reporters on the scene.

Goodell also arrived and made a beeline for the front door.

According to reports, Goodell’s reception was unkind, presumably thanks to Patriots fans in the area.

10:15 a.m. ET: The latest chapter of Deflategate will be written Wednesday.

New England Patriots quarterback Tom Brady and NFL commissioner Roger Goodell are both in New York, where they’ll meet in front of a federal judge to discuss the ongoing issues centered around Brady’s four-game suspension.

Goodell personally upheld Brady’s four-game ban for his alleged role in Deflategate, which prompted Brady and the NFL Players Association to file suit in federal court. Before it gets to that, however, there will be a mediation of sorts, with U.S. District Court Judge Richard Berman overseeing proceedings.

We’ll have all the updates here as they’re available. 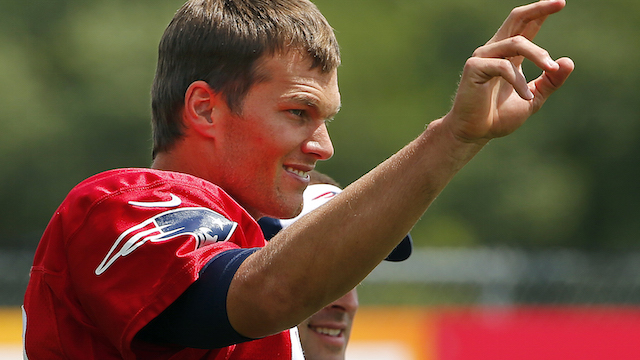