PROVIDENCE, R.I. — The Boston Bruins began their exhibition slate on a positive note Sunday night, shaking off a sluggish start to knock off the New Jersey Devils in the preseason opener for both teams.

Head coach Claude Julien clearly thought highly of his team’s performance, commending no fewer than a dozen players in his postgame meeting with reporters.

“There were a lot of good things,” Julien said after Boston’s 2-0 victory at Dunkin’ Donuts Center. “… There?s a lot that I think I can take out of this game.”

Included among those positives were:

— The Bruins’ offense ran through defenseman Matt Irwin, who signed as a free agent this summer after three seasons with the San Jose Sharks.

Irwin scored both Boston goals — both on the power play — and accounted for eight of his team’s 21 shots on goal. No other Bruin had more than two.

?He?s been known for that,” Julien said. “I think last year when he scored goals, it?s not about the power of his shot. I think he?s really good at finding those lanes to the net, and when there?s a good screen there, he finds places to put the puck.”

Ryan Spooner and Colin Miller assisted on Irwin’s first goal, and Alexander Khokhlachev was credited with the helper on the second.

— Sunday represented the first round of Bruins backup goalie tryouts, with Jonas Gustavsson (18 saves) and Jeremy Smith (12 saves) each playing roughly half the game. Both turned in solid performances, and Gustavsson was especially impressive with 11 saves during Boston’s sloppy first period.

?The first was obviously our worst period where we were trying to feel our way through, and he held the fort pretty good there,” Julien said. “There was  a lot of traffic in front of him at times, and he was finding the puck. I thought he did a great job. Both of them played well.”

Competition for the role of Tuukka Rask’s understudy will be steep this preseason, as Providence Bruins goalie Malcolm Subban and North Dakota product Zane McIntyre also are battling for the spot.

“It’s a big competition, obviously,” Gustavsson said. “But that’s no news for me, either. It’s a new situation, but you know you’ve got to just go to yourself and try to improve every day, because there’s so many good goalies around. It doesn’t really matter where you are, you’ve always got to try to take your game to the next level the whole time, otherwise some young kid’s going to take your spot.”

— The chippiness that pervaded much of the first two periods boiled over in the third, resulting in 11 third-period penalties and several post-whistle scuffles. Julien said he was pleased to see his players sticking up for each other despite the fact that Sunday’s game came on just the fourth day of training camp.

?It feels good, because we talked about that, as well,”the coach said. “We want a group of guys who are going to play for each other, not just for themselves. They want to do well as individuals, but they want to play for not just the guy next to them, but the whole group of guys. I wanted to see part of that (Sunday night), and you saw that. Guys stuck together.” 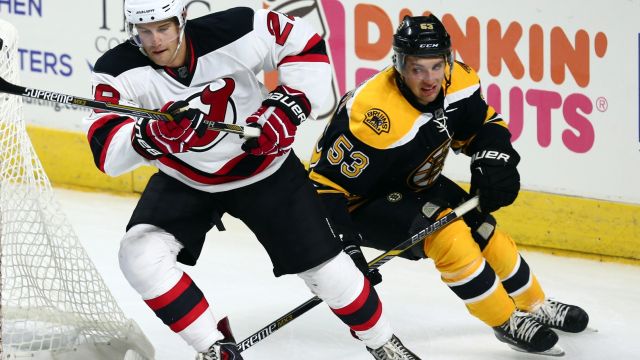