WALTHAM, Mass. — Jared Sullinger and his Boston Celtics teammates had quite the long day fielding questions from reporters Friday at the team’s media day, but the forward powered through.

The Celtics are hoping that display of stamina is a sign of things to come.

Sullinger’s weight has been a big storyline throughout his young career, as he’s often been criticized for a lack of conditioning on the court. But the 23-year-old made it very clear he was working to drop the pounds this offseason, and at least in his mind, that hard work has paid off.

“This is probably the best I’ve ever felt — emotionally, physically — going into the season,” Sullinger said Friday.

The fourth-year forward spent time training in the offseason with former NBA player John Lucas, who put him through rigorous workouts, many of which didn’t involve actual basketball activities. Sullinger wouldn’t disclose exactly how much weight he’s lost — a “good amount,” he offered — but added there’s still work to be done when training camp begins Saturday.

“You can’t really say I’m where I want to be as far as conditioning-wise, because I haven’t played 5-on-5 in like three weeks,” Sullinger said. “There’s a difference between being in the best shape that you can be practice-wise, and then there’s game shape. … I’m not there yet, but I’m closer than you would imagine.”

Sullinger played in just 58 games last season after appearing in 74 contests during the 2013-14 season, and he’ll need to be on the court as much as possible if he wants to distinguish himself in a crowded frontcourt that now includes offseason additions Amir Johnson and David Lee.

Celtics coach Brad Stevens is well aware of this fact and told reporters Friday that emphasizing conditioning and health with Sullinger is nothing new.

“Just playing as well as you can for as long as you can,” Stevens said. “That’s the same discussion that I usually have with him. I’m a lot more focused on the ‘on the court’ than I am anything else.”

As for Celtics president of basketball operations Danny Ainge — who hasn’t been shy about criticizing Sullinger in the past — it appears he’s taking more of a “wait and see” approach.

“I haven’t weighed him yet.”

Tom Brady On Relationship With Bill Belichick: ‘He Knows Me As Well As Anybody’ 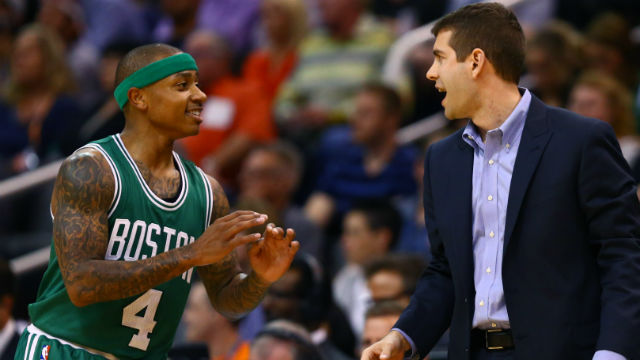