BOSTON — Hockey officially returned to TD Garden on Tuesday night — punches and all.

Boston Bruins winger Justin Hickman, playing in his first game for the Black and Gold, dropped the gloves with Washington Capitals defenseman Tyler Lewington during a second-period stoppage in play.

It was the first fight by a Bruins player thisÂ preseason, and after the combatants traded a few blows, Hickman slammed Lewington to the ice to earn a roar of approval from the Garden crowd.

The 21-year-old Hickman is no stranger to pugilism. HeÂ rackedÂ upÂ 27 fighting majors in four seasons with the Western Hockey League’s Seattle Thunderbirds, according to HockeyFights.com.

Craig Smith Gets Simple, Yet Perfect, Endorsement From Bruce Cassidy 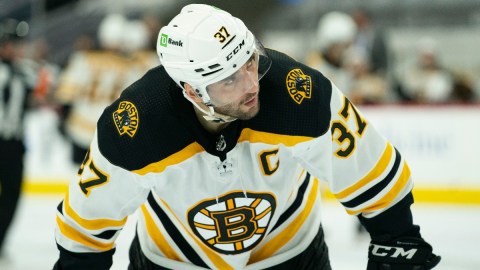 Will Patrice Bergeron Follow Patrick Marleau As NHL’s Next Record-Setter?