FOXBORO, Mass. — Tom Brady was at Gillette Stadium at some point Thursday, just not in plain sight.

The New England Patriots quarterback learned Thursday morning that his four-game suspension had been lifted by U.S. District Court Judge Richard Berman. Hours later, he was at the stadium ahead of New England’s fourth and final preseason game.

Brady got some work in on the practice field before the game, according to NFL Network, but No. 12 was nowhere to be seen once the two teams took the field. While the beloved quarterback was out of sight, he certainly wasn’t out of mind.

Obviously, the jersey of the wildly popular quarterback is going to be worn all over the place for home games. On Thursday night, it seemed like there were even more No. 12 jerseys in the Gillette Stadium stands.

Fans also expressed support for the signal-caller in other ways. Multiple “Free Brady” flags and signs were displayed at tailgates and inside the stadium alike. During the first TV timeout, a Brady highlight montage was played on the Gillette Stadium video boards with Jay-Z’s “Public Service Announcement” — the song that plays when Brady comes on to the field — playing in the background. Of course, Brady wasn’t the only one feeling the love Thursday night. Patriots fans also expressed their gratitude for Berman, who not only overturned Brady’s suspension, but also took some shots at commissioner Roger Goodell and the NFL in the process. Multiple fans displayed signs promoting Berman for president, with the biggest cheer of the night coming for a “Judge Berman President 2016” sign that was shown on the video board during a second-quarter TV timeout. While it’s unlikely Berman will be making any appearances in Foxboro any time soon, Brady will emerge from the shadows very soon. He’ll be back one week from Thursday night for the start of the 2015 season. It’s safe to assume he’ll feel plenty of love then, too.

John Daly: I’m OK Because I ‘Smoke Two Packs Of Cigarettes A Day, Not Three’ 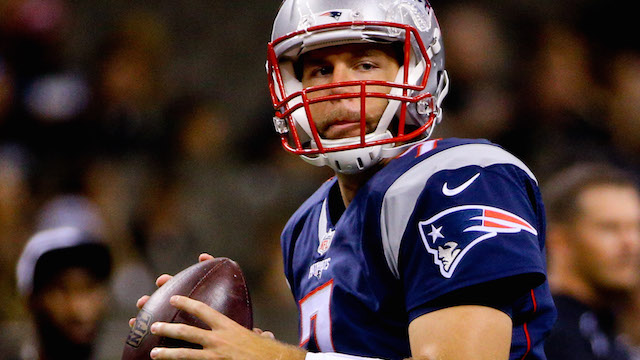 Patriots-Giants Live: Giants Hold On For 12-9 Win In Preseason Finale